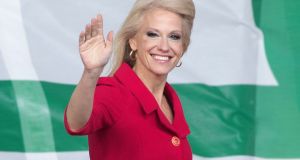 Senior White House adviser Kellyanne Conway drew sharp criticism and complaints on Thursday over the ethics of using her position to promote product lines of President Donald Trump’s daughter Ivanka, a day after Trump attacked a retailer for dropping them.

Federal ethics rules prohibit executive branch employees from using their positions to endorse products or for the private gain of friends.

“Go buy Ivanka’s stuff . . . I’m going to go get some myself today,” Conway told Fox News in an interview from the White House. “I’m going to give a free commercial here: Go buy it today, everybody.”

Republican Jason Chaffetz, chairman of the House of Representatives oversight committee, told the Associated Press Conway’s promotion of the brand was “clearly over the line, unacceptable”.

The non-profit Citizens for Responsibility and Ethics in Washington and Public Citizen filed complaints with the Office of Government Ethics (OGE) and the White House Counsel’s Office.

“It’s a violation of the rule,” Norman Eisen, who served as an ethics adviser to Democratic president Barack Obama, told MSNBC. “It’s a serious matter.”

The top Democrat on the House Oversight and Government Reform Committee, Elijah Cummings, called on the committee to refer the matter to the OGE for potential disciplinary action.

The OGE did not respond to requests for comment.

Chaffetz said that he and Cummings were going to send a joint letter to the White House and the OGE, according to a tweet by NBC News’ Capitol Hill producer.

“That was wrong, wrong, wrong. It is wholly unacceptable no if, ands or buts about it,” Chaffetz said of Conway’s comments, according to the NBC producer.

NBC reported that Chaffetz said, “It should have never happened and they better learn this lesson very quick.” He said he was not sure what the remedy was or if his committee would have a hearing looking into the matter, but this letter and referral “is a first step”.

Asked at a press briefing on Thursday if Conway had crossed an ethical line, White House press secretary Sean Spicer said, “She has been counseled on that subject, and that’s it.”

Ivanka Trump had said she would step away from her company when her father took office in the White House.

Retailers that have dropped Ivanka Trump products include Neiman Marcus and HSN Inc.