EU vote on Turkey goes beyond membership of club

Europe Letter: Effects of ‘freezing out’ Ankara include risks to security and human rights 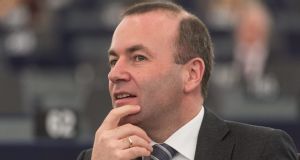 MEPs are to vote on Thursday on a resolution calling for the European Union to freeze membership talks with Turkey. The vote could be a watershed moment in EU-Turkish relations, an area that has long been one of the most controversial aspects of European politics.

Four months after an attempted coup – apparently involving military units from Istanbul to Ankara – shocked the ruling establishment in Turkey, the effects are still being felt.

More than 110,000 people, including judges, academics, and members of the military, have been dismissed from their posts as part of a government crackdown.

Numerous media outlets have been closed, and the editor-in-chief of opposition newspaper Cumhuriyet has been detained on allegations of connections to Kurdish militants and a group linked to US-based cleric Fethullah Gülen, whom the Turkish government blames for fomenting the coup.

The country was in the international spotlight for further negative reasons this week after the government agreed to withdraw a law that would allow men to escape prosecution for sexually assaulting minors if they agreed to marry them.

The nationalist bloc in the Turkish parliament also signalled this week that it may support changes to the constitution that could allow the Turkish president to stay in office until 2029. A Bill may be brought forward in the coming months.

The government’s tightening grip on power since the July coup has fuelled calls for Turkey’s membership talks to be suspended.

It was a message echoed by most of the main political groups. “Human rights, civil rights, democracy are non-negotiable if you want to be part of the EU,” the head of the socialist group, Gianni Pittella, warned.

As calls have mounted for Turkey’s accession negotiations to be suspended, Ankara has pushed back in recent weeks. On Wednesday Turkey’s president, Recep Tayyip Erdogan, dismissed today’s vote in Strasbourg as having “no value”.

In recent weeks, he has urged Turkey not to become “fixated” on EU membership, suggesting that the country may hold a referendum on EU membership. This has been accompanied by overtures to Moscow following a rapprochement between the two countries earlier this year, with Erdogan suggesting Turkey could join the Shanghai Pact, which includes Russia and China, as an alternative to allying with the EU.

The suggestion that Turkey might be prepared to turn its back on the West has significant implications for its future political path and role in the region, particularly in light of its Nato membership.

Thursday’s resolution is widely expected to be passed. Some groups are calling on the EU to go even further, with Green MEPs urging politicians to resist calls from Ankara for further enhancement of their membership of the EU customs union.

Though the final decision on ceasing membership talks would be taken by member states, and Thursday’s vote is not binding, the European Parliament ultimately has a vote on EU enlargement matters and buy-in from MEPs is essential.

The events in July, and the subsequent crackdown, meant it became inevitable that Turkey was never going to change the anti-terrorist legislation that Brussels demanded as a condition for lifting visa restrictions.

With elections looming in a number of EU member states next year, EU leaders are only too aware that support for EU membership for Turkey is unlikely to be a vote-winner given the current concerns about security and immigration sweeping the continent.

But while a cessation of membership talks with Turkey could give a short-term bounce at the ballot box, the longer-term implications for the EU could be dangerous.

The promise of EU membership – even if it never comes to fruition – is one of the key cards Brussels can play in leveraging influence in the region and encouraging accession countries to aim towards higher standards of democracy and human rights.

Given Turkey’s hugely important role in the complex geopolitics of the region – in terms of the Syrian civil war, the country’s role as a transit country for migrants, and its relations with Russia as a Nato member – ensuring that the EU keeps communications open with Ankara is vitally important for European interests in the future.