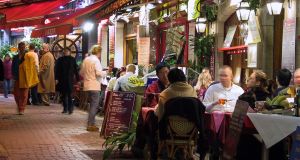 The colonial presence of Belgium in the Congo and the brutality of the regime of King Leopold II is the subject of an exhibition in Brussels’s Bozar museum.

Situated along the stately streets near the Royal Palace in central Brussels stands Bozar, the city’s Centre for Fine Arts. A few hundred metres away an imposing bronze statue of King Leopold II on horseback dominates the square near the Royal Palace. The statue, built with copper imported from the Belgian Congo, is a monument to the 19th-century king who presided over one of the most brutal imperial projects of modern times. Millions of Congolese died during the conquest of the Congo, an area 80 times the size of Belgium which Leopold himself never visited.

In Belgium, reminders of the country’s colonial past are everywhere, from the sophisticated African art market that still thrives in the Sablon district of Brussels, to the lively Matonge area of the capital where the first wave of Congolese immigrants settled after independence, and to Antwerp’s world-class diamond industry that continues to operate from the Belgian port city.

A new exhibition at Bozar aims to shed light on one of the most troubled periods of Belgium’s history.

Congo Art Works: Popular Painting is the latest collaboration between Bozar and the Royal Museum for Central Africa (RMCA) in Tervuren, which closed in 2014 for renovation.

More than 80 paintings collected from 15 cities across the Democratic Republic of Congo between 1968 and 2012 are juxtaposed with older works drawn from the RMCA’s permanent collection. The result is a fascinating reflection on the complex dynamics that underpins the Congo’s place in Belgian national identity and culture.

The exhibition opens with a display of glossy photographs from specifically commissioned magazines published by the regime in the 1950s which promoted ideals of Congolese middle-class domestic life. A magazine cover from Nos Images in December 1956 shows a black boy and white Belgian girl playing together over a nativity scene; others profile immaculately dressed Congolese families, winners of the best-kept home competitions regularly held by the administration. Promoting these acts of cultural appropriation by the evolués – a term for the emergent native middle class – was central to Belgium’s imperial narrative.

But as the exhibition continues, an alternative narrative emerges – Edouard Manduau’s iconic painting from 1882, La Civilisation au Congo which shows a black man being tied to a stump and whipped by his compatriots while a white uniformed officer casually stands back and takes notes; Angali’s 1991 piece, Temps Belge 1919 which depicts four black slaves carrying a plump white westerner in a makeshift sedan chair to his gîte.

The titles of the paintings leave little room for interpretation; the political message is clear. One painting is entitled Slave Hunters; another 1999 work has the words “Promotion of Cotton Farming (forced labour)” emblazoned across a picture of Congolese workers trooping by a colonial administrator sitting beneath a Belgian flag. The anger is palpable.

But the work of the Congolese artists on display does not simply express a post-colonial, anti-western message. Equally withering are the many works preoccupied with the failed ideals of the independence movement. The disillusionment with Congolese politics after the country gained independence in 1960 surfaces in many of the works, such as the 1999 oil work by JP Kaswende, Fatigue: 32 ans de dictature, a portrayal of a protest march, and the 2000 piece by Chéri Chérin Demon-Cratie, a tableau of images symbolising the sad slide of the DRC into civil war and chaos.

For the curators, Bambi Ceuppens and Sammy Baloji, the exhibition is an attempt to decolonise what is often seen as the world’s last “colonial” museum.

The shadow of the RMCA museum which is due to reopen next year after renovation, looms large over the exhibition. The exhibition includes an ironic 2002 painting of the museum itself entitled Reorganisation.

The museum, built at the height of Belgium’s imperial powers in the late 19th century, houses the largest collection of African paintings, sculptures, audio archives and documentation in the world. But it is also one of the most dated and reactionary, its depiction of the artistic and historical material plundered in the Congo alternating between romanticism and offensive racial stereotyping.

The decision to invite two members of the African diaspora in Belgium to curate the current exhibition is “significant and important”, says Bozar’s chairman, and is “in line with the museum’s new vision of sharing ownership and interpretation of its collections”.

As a note to the exhibition states, Congo Art Works: Popular Painting is an attempt to “decolonise the gaze”.

Whether the reopened museum succeeds in reinventing itself as a modern post-colonial space where the history of imperialism can be reimagined remains to be seen. If so, it has the potential to open up a positive new chapter in Belgium’s troubled relationship with its imperial past.