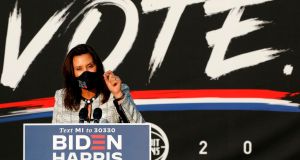 Six men have been charged with planning to kidnap Michigan governor Gretchen Whitmer, according to newly unsealed court records released on Thursday.

The group of men had been under surveillance by the FBI since the early summer, and had also plotted to overthrow the government. A wider group of 13 men were charged with a litany of terrorism and conspiracy offences, including a plot to storm the Michigan state capitol building in Lansing.

Six of the men were accused of plotting to kidnap the Democratic governor and hold her hostage, and had surveyed Ms Whitmer’s holiday home during the summer.

According to the court documents, the group had met for firearms training and combat drills.

Ms Whitmer, who has been governor of Michigan since 2018, had been the target of several social media attacks by President Donald Trump earlier this year over her handling of coronavirus.

Michigan was one of the worst affected states in the US in the early phase of the coronavirus pandemic, with the state introducing strict restrictions to combat the virus, which prompted a backlash from some in the state. In April and May, protesters – many of them armed – entered the state capitol building in Lansing to demonstrate against the restrictions in defiance of the state’s stay-at-home order in place at the time.

At a press conference on Thursday, Ms Whitmer said she could “never have imagined anything like this” happening when she was elected governor.

She lambasted Mr Trump, noting that he had advised the neo-fascist group Proud Boys to “stand back and stand by” at last week’s presidential debate.

“Hate groups heard the president’s words not as a rebuke but as a rallying cry, as a call to action,” she said. “When leaders speak, their words matter, they carry weight. When our leaders meet with, encourage, fraternise with domestic terrorists they legitimise their actions and they are complicit. When they stoke and contribute to hate speech they are complicit.”

This message was reiterated by Michigan’s attorney general Dana Nessel. “I have watched and have seen and listened over the course of these many months and when we hear the president say, ‘liberate Michigan’ or, ‘there are very fine people on both sides,’ these are not just subtle winks or dog whistles, these are messages to people who want to do harm,” she said. “These are commands to action.”

The US has witnessed a rise in right-wing militia groups demonstrating on the streets, in part as a reaction to the Black Lives Matter protests that took place following the killing of African-American man George Floyd earlier this summer.

Mr Trump was widely criticised – including by many Republicans – for failing to denounce white supremacy during last week’s debate. The president later sought to clarify his comments, saying he did not know who the Proud Boys were.

Michigan is a key focus for both presidential candidates in the election campaign. The state voted narrowly for Mr Trump in 2016, making it part of a trio of rust-belt states that swung away from Democrats. Polls, however, show that Mr Biden is leading in the state, particularly in the Detroit area and other urban regions of the midwestern state.