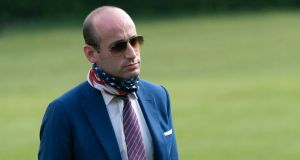 Stephen Miller tested positive on Tuesday, joining the many members of the White House staff who are now self-isolating following diagnoses for the virus. File photograph: EPA/Chris Kleponis/ Pool

Doctors treating Donald Trump for coronavirus delivered an upbeat assessment of the US president’s progress on Wednesday, as senior adviser Stephen Miller became the latest member of the president’s inner circle to test positive for Covid-19.

Mr Miller, the president’s chief speech writer, tested positive on Tuesday, joining the many members of the White House staff who are now self-isolating following diagnoses for the virus. His wife, Katie Miller, who works for vice-president Mike Pence contracted Covid-19 in May.

In a written update, White House physician Sean Conley said the president was fever-free and not showing symptoms, five days after he was first diagnosed with the illness. He also had “detectable levels” of coronavirus antibodies.

“The President this morning says ‘I feel great!’ ” Mr Conley said in the memo on the president’s health released by the White House on Wednesday.

With official business limited in the West Wing due to the coronavirus outbreak, Mr Trump delivered a flurry of tweets throughout the day, launching tirades on a range of subjects including the “fake news media” and the “radical left”, whom he accused of staging a “coup”, an apparent reference to the investigation into Russian interference in the 2016 election.

“THE FAKE NEWS MEDIA IS THE REAL OPPOSITION PARTY!,” he wrote in many of the all-cap tweets he posted throughout the morning. He also revived his unproven allegations that postal voting is unsafe, ahead of a predicted rise in the number of Americans choosing to vote by mail in November’s election because of the pandemic: “THE MEDIA IS CORRUPT, JUST LIKE OUR DEMOCRAT RUN BALLOT SYSTEM IS CORRUPT! Look at what’s happening with Fake, Missing and Fraudulent Ballots all over the Country??? VOTE.”

Mr Trump also described his Democratic presidential rival Joe Biden as a “wacko”, and Mr Biden’s running mate Kamala Harris, who was due to take part in a vice-presidential debate with Mike Pence on Wednesday night, as “far further left” than Bernie Sanders.

The president also singled out individual states in several posts. “VOTE TRUMP CALIFORNIA,” he tweeted, despite standing virtually no chance of being elected in the country’s most populous state, which is Democrat-leaning.

Responding to a tweet that included a clip from Michigan’s Democratic governor Gretchen Whitmer, he tweeted: “Michigan . . . open up your Churches and your Schools. Auto companies pouring in and expanding (thank you Mr President!). Have fun!,” the latest encouragement by the president for states to lift coronavirus restrictions despite government guidance.

A number of interventions by Mr Trump on Twitter also raised doubts that a new coronavirus stimulus plan could be agreed by Congress.

House of Representatives speaker Nancy Pelosi had been negotiating with Treasury secretary Steve Mnuchin about a new multibillion dollar plan, but Mr Trump on Tuesday night said he was instructing his representatives to end negotiations until after the election.

However, the president appeared to open the door to some kind of stimulus package on Wednesday, tweeting that he was “ready to sign right now” on direct payments for Americans and aid for small businesses, key parts of the multibillion dollar package under consideration.

After a day of contradictory messages from the president, Ms Pelosi and Mr Mnuchin resumed discussions by phone on a more narrow stimulus package, focused solely on the airline industry for now. But hopes of agreement between Republicans and Democrats on a package faded.

In a worrying sign for Mr Trump less than four weeks before the election, a new poll from Quinnipiac University showed Mr Biden leading the president in the key battleground states of Pennsylvania and Florida. The Democratic nominee has widened his lead over Mr Trump by 11 points in the sunshine state, while his lead in Pennsylvania has increased to 13 points, up from eight points in September.

Mr Trump also received a setback in his attempt to keep his financial affairs private, after a federal appeals court rejected his bid to block a subpoena demanding access to his tax records. However, the New York district attorney Cyrus Vance agreed not to enforce the subpoena immediately, while Mr Trump’s lawyers seek a stay from the supreme court.