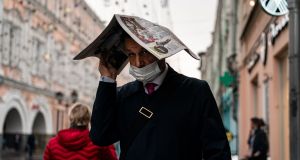 A man wearing a face mask uses a newspaper to protect himself from the rain in central Moscow on Thursday. Photograph: Dimitar Dilkoff/AFP via Getty Images

Russian authorities recommended people stay at home this weekend and urged them to take more safety precautions as the number of new coronavirus cases shot up on Thursday to nearly the highest it has been since the pandemic began.

Officials reported 11,493 new infections in the last 24 hours, close to a record daily high of 11,656 cases confirmed on May 11th at the height of the initial outbreak when a strict lockdown was in place.

Russia currently has no lockdown and the Kremlin has said there are no plans to impose one for now, although the city of Moscow has recommended people over the age of 65 isolate and told businesses that at least a third of staff must work remotely.

“We recommend people spend the coming weekend at home with their families and co-habitants,” Alexei Kuznetsov, an aide to Russia’s health minister, was quoted by RIA news agency as saying.

On Thursday, the Kremlin said the rise in cases was a cause for “serious concern” and told people to take proper precautions or else expect further restrictions.

“If we don’t all draw conclusions from this for ourselves – and by that I mean wear masks, and observe all hygiene and sanitary regulations – then the numbers will grow even faster,” Kremlin spokesman Dmitry Peskov said.

“And then regional leaders will have to think about how to correct that,” he told reporters on a conference call.

Patriarch Kirill, the 73-year-old leader of Russia’s Orthodox Church, said on Thursday he had gone into self-isolation after coming into contact with someone infected with the new coronavirus.

But the patriarch was in good health and was continuing to work, church spokesman Vladimir Legoida said.

Russia, which has a population of about 145 million, has reported 1,260,112 cases of the virus, the fourth largest tally in the world.

Officials said on Thursday that 191 people had died in the last 24 hours, pushing the official death toll to 22,056. – Reuters

1 Ireland in precarious position as third Covid-19 wave could be more deadly, Nphet warns
2 Man arrested over murder of mother and her two children
3 Covid crisis: Republic to move back to Level 3 as shops open from Tuesday
4 Ex-barrister Patrick Russell conned people out of more than €12m, gardaí say
5 Brexit talks: UK seeks to strip fishermen of 80% of fish caught in EU waters
Real news has value SUBSCRIBE