After years trying to destabilise the West, the Russian leader is surrounded by instability 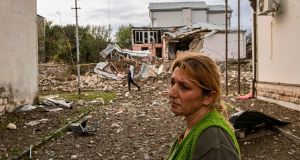 A woman stands in front of a destroyed house in the Nagorno-Karabakh region’s main city of Stepanakert on Thursday, during the ongoing fighting between Armenia and Azerbaijan over the disputed region. Photograph: Aris Messinis/AFP via Getty Images 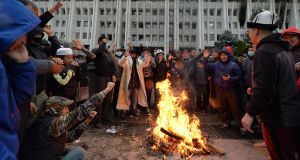 Protesters in front of the seized main government building, known as the White House, in Bishkek, Kyrgyzstan, on Tuesday. Photograph: Vyacheslav Oseledko/AFP via Getty Images 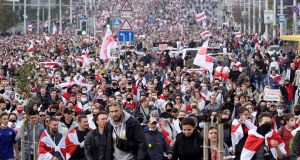 In Russia’s self-proclaimed sphere of influence, Russia is losing its influence. Concurrent crises in Belarus, Central Asia and the Caucasus region have blindsided the Kremlin, leaving it scrambling to shore up Russian interests in former Soviet republics and undermining president Vladimir Putin’s image as a master tactician on the world stage.

“There is nothing good about these conflicts for Moscow,” said Konstantin Zatulin, a senior Russian lawmaker and Putin ally who specialises in relations with what Russians call their “near abroad”.

Putin has spent years building up Russia as a global power, with a hand in hot spots from Latin America to the Middle East, and even meddling in presidential elections in the United States. But after working for years to destabilise the West, he suddenly finds himself surrounded by instability. Once seen as sure-handed in foreign affairs, he seems to have lost his touch.

Every day of conflict in Karabakh is, effectively, helping zero out Russia’s authority

In Belarus, Putin responded to a street uprising in August by propping up the country’s unpopular autocrat, president Alexander Lukashenko, turning public opinion against Russia in what had previously been Europe’s most Russia-friendly country.

In Kyrgyzstan in Central Asia, protesters this week appeared on the verge of toppling president Sooronbay Jeenbekov, less than two weeks after Putin pledged to him in a rare in-person meeting that “we will do everything to support you as the head of state”.

And in the Caucasus, the long-simmering conflict between Armenia and Azerbaijan over the enclave of Nagorno-Karabakh erupted last week into the worst fighting since the 1990s, threatening to undo the balancing act that had allowed Russia to cultivate diverse links to the region.

“Russia was doing all it could to maintain ties both with Azerbaijan and Armenia,” Zatulin said. “Every day of conflict in Karabakh is, effectively, helping zero out Russia’s authority.”

The spate of new challenges to Russian influence strikes at the heart of Putin’s years-long effort to cast himself as the leader who restored the great-power status that the nation lost with the collapse of the Soviet Union. Even as the Kremlin denied Russian interference in the 2016 US presidential election, Russian state television gleefully reported on the American allegations of that interference as a sign that Moscow was being reckoned with again on the world stage.

Now, rather than react decisively to emergencies close to home, Putin sounds ambivalent about Russia’s role. “We hope the conflict will end very soon,” he said of Nagorno-Karabakh, in a television interview broadcast on Wednesday. Minutes later, referring to Kyrgyzstan, he said, “We hope that everything will be peaceful.”

The confluence of crises in Russia’s own neighbourhood is such that some pro-Kremlin commentators are already accusing the West of an organised campaign to sow discord in the post-Soviet regions. More balanced analysts, however, have singled out one constant factor in the growing unrest. Both Russia and its neighbours, they say, have been destabilised by the coronavirus pandemic, which has exposed distrust in institutions and in out-of-touch leaders across the region.

It helped undo the fragile truce between Azerbaijan and Armenia, and, in Belarus and in Kyrgyzstan, the disease set the stage for public uprisings by exposing the ruling elite as disconnected from people’s suffering. Lukashenko angered Belarusians by playing down the danger of the virus, joking that vodka would cure it; in Kyrgyzstan, critics blamed officials for using coronavirus aid money to enrich themselves.

Within Russia, the economic hardship caused by the pandemic has helped deepen public anger against Putin. In the far eastern city of Khabarovsk, for example, thousands of protesters, angry over the arrest of a popular governor, spilled into the streets last Saturday for the 13th week in a row.

Some analysts say that public discontent within Russia means that Putin needs to turn more of his focus to domestic issues such as economic hardship, pollution and poor healthcare, rather than delving into global geopolitics. But developments in recent weeks have given Putin more reason to focus on the latter.

“For Putin, practically his entire mission and his vision of Russian greatness and success revolve around his foreign policy agenda,” said Tatiana Stanovaya, a non-resident scholar at the Carnegie Moscow Center, a research organisation focused on politics and policy. The new series of crises, she went on, “will very much distract Putin from domestic problems.”

The centrality of the former Soviet lands to Putin’s foreign policy was evident in the Kremlin’s list of world leaders who called Putin to wish him a happy birthday on Wednesday, when he turned 68. Of the 12 who called, only three leaders – those of Israel, India and Cuba – head countries outside the former Soviet Union.

In Armenia, which hosts a Russian military base, some hope for a more forceful stance by Russia in the conflict, which has already killed at least 250 people, according to official reports. But Russia’s ability to influence events in the Caucasus now appears limited, despite its past role as a mediator in the Nagorno-Karabakh conflict. Turkey, Azerbaijan’s most important ally, has taken on a more assertive regional stance.

“Turkey, indeed, in this current situation probably should be considered as a balance to unilateral Russian interference,” said Farid Shafiyev, chairman of the Center of Analysis of International Relations in the Azerbaijani capital, Baku. In the Caucasus, he added, “the Russian role is probably diminishing.”

Across the former Soviet Union, Russian remains the lingua franca, and the proliferation of mostly uncensored internet access across the region means that protests in one country can easily inspire a disenchanted populace in another. Some protesters in Belarus carried signs supporting the demonstrations in Khabarovsk, more than 6,000km away. And, ahead of Kyrgyzstan’s parliamentary elections last Sunday, government critics were keeping an eye on Belarus, where it was a blatantly falsified election in August that sparked the uprising against Lukashenko.

By unconditionally supporting Lukashenko, we are creating an enormous problem for ourselves in the future

But, for Moscow, recent events in Belarus offer a cautionary tale that illustrates the fragility of Russia’s standing among its neighbours – carrying echoes of Ukraine’s more violent departure from Russia’s orbit in 2014. Some Belarusians who had been well disposed toward Putin turned against him after he propped up Lukashenko in the face of the protests.

Zatulin, the Russian lawmaker, said officials “at the highest levels of the Russian Federation” believed that Lukashenko would need to step down “sooner or later”. But Lukashenko had argued to Russian officials, Zatulin said, that his stepping down in the face of street protests could set a dangerous precedent for what might happen to Putin himself.

“By unconditionally supporting Lukashenko, we are creating an enormous problem for ourselves in the future with the majority or a significant part of the Belarusian population,” Zatulin said. “We are creating a problem for ourselves with the other Belarusian politicians and public figures, who are increasingly forced to seek sympathy in the West. Russia wants that least of all.”