US vice-presidential debate: On coronavirus record, Pence tries to defend the indefensible

Covid-19, discussions on race and Donald Trump's taxes were the issues that dominated as Kamala Harris and Mike Pence faced off in the only vice-presidential debate ahead of the US election on November 3rd. Video: Reuters 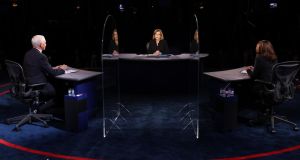 Following last week’s unruly debate between Donald Trump and Joe Biden, many Americans had hoped that Wednesday night’s vice-presidential face-off between Mike Pence and Kamala Harris might be a more civilised affair.

As debate moderator Susan Page warned at the outset: “We want a debate that is lively. But Americans also deserve a discussion that is civil.”

In this regard, the 90-minute one-on-one did not disappoint. It was infinitely more polite and lacked the aggression and chaos of last week’s presidential debate in Cleveland.

Nonetheless, the extraordinary events that unfolded since last week – Trump’s Covid-19 diagnosis and his admission to hospital – framed the evening.

[Washington correspondent Suzanne Lynch talked to foreign editor Chris Dooley about how the Covid-19 outbreak in the White House has upended the presidential election. To listen, click here]

The plexiglass that separated the candidates as they sat at two tables on stage in Salt Lake City was an omnipresent reminder of the pandemic that has dominated American political life this year and could be the defining dynamic of this presidential election.

Unsurprisingly, the first part of the debate focused on coronavirus.

Poised and controlled, Harris showed her experience as a prosecutor, laying out her case against the Trump presidency, as she methodically worked through the facts – that 210,000 Americans have died, one in seven people has been infected, and many employees have been treated like “sacrificial workers”. She charged Trump – and Pence in his capacity as head of the coronavirus task force – with “the greatest failure of any presidential administration in the history of our country”.

Pence in many ways was trying to defend the indefensible. “Our nation has gone through a challenging time,” he said. “From the very first day, president Trump has put the health of the nation first,” repeating the point made by the president again and again that his decision to stop travel from China saved “countless lives”. As Pence spoke about the need to respect the good sense of the American people, Harris snapped back: “You respect the American people when you tell them the truth.”

As the debate pivoted away from coronavirus, Pence strengthened somewhat. As expected, he tried to paint Harris as a tool for the radical left, citing articles that had described her as more liberal than fellow Democratic senator Bernie Sanders. Focusing on her Senate record, he said she was one of 10 senators to vote against the revised Nafta trade deal, known as the USMCA, because it did not go far enough on climate change.

While would be received as praise by left-wing members of the Democratic Party who were concerned about Harris’s more centrist record in her pre-Senate career, Pence’s criticism – “you put your radical environmental agenda ahead of American jobs” – is likely to ring true with many Americans.

Similarly, he was on more comfortable ground with the economy. After a lengthy description from Harris of Biden’s planned tax reform, Pence looked into the camera and delivered one of his best comments of the night. “You just heard Kamala Harris tell you – on day one Joe Biden is going to raise your taxes.”

With polls showing that voters still rate Republicans higher when it comes to handling the economy, this will likely resonate with many voters. However, Harris’s argument that the American people need to know about Trump’s taxes was well-delivered. “It would be really good to know who the commander in chief owes money to,” she said.

Overall, Harris was less forceful than might have been expected – perhaps a conscious strategy by the senator. While she was famed for stand-out confrontational moments during the Democratic primaries, and during her questioning of supreme court nominee Brett Kavanaugh and attorney general William Barr, she refrained from calling out Pence at certain junctures, apart from one moment in which she turned and said: “I’m still speaking.”

With Joe Biden well ahead in the polls, perhaps her strategy was to play it safe. Whatever the motivation, the result was that Pence appeared to be interrupting Harris on several occasions, a dynamic that is unlikely to go down well with female voters.

Overall, Wednesday night’s debate is unlikely to move the dial very much among the electorate. In terms of the structure of the debate itself, both candidates were permitted to ignore questions, mainly because the moderator failed to deliver follow-ups.

Similarly, unsubstantiated claims went unchallenged – for example, Pence’s illogical remark that if swine flu had been as lethal as the coronavirus when Joe Biden was vice-president, two million American lives would have been lost.

At another point in the debate, both candidates managed to avoid answering the question of what their state should do in terms of abortion provision if the landmark supreme court ruling Roe v Wade, which establishes a constitutional right to abortion, is overturned.

Similarly, Pence refused to say if his health policy would protect people with pre-existing conditions, while Harris once again refused to say if Democrats would pack the supreme court with liberal justices. More worrying, Pence did not commit to a peaceful transfer of power after the election.

An important subtext of the debate was that this was an opportunity for the American public to assess the competency of two people who could well become commander-in-chief in the coming years.

Overall, the 90 minutes went slowly – the most dramatic incident of the night was when a fly settled on Pence’s head for a good two minutes. Wednesday night may have lacked the fireworks of the first presidential debate, and at times the debate dragged. In many ways it harked back to a bygone era of US politics when political debates were boring. Given the fall in standards and presidential decorum under Trump, that’s probably a good thing.