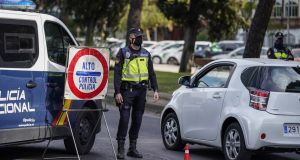 A Spanish court has ruled that a partial lockdown introduced a week ago in Madrid was illegal, delivering a severe blow to the government’s anti-Covid strategy and leaving the capital in a state of limbo and confusion.

Madrid’s high court of justice ruled that restrictions which sought to prevent non-essential travel into and out of the capital and nine surrounding cities violated the “fundamental rights” of inhabitants.

The measures were introduced on October 2nd, affecting nearly five million people, but required the court’s ratification in order to remain in place and to allow police to fine those who flouted them. The tribunal’s decision meant that the restrictions on movement were immediately lifted, although other measures, such as early closing for bars and restaurants and limits on the number of people allowed in public spaces, remain in place.

The leftist central government of Pedro Sánchez has identified Madrid and its surrounding area as a major problem in recent weeks as the country has battled a second wave of coronavirus. Over a third of Spain’s new infections recently have been registered in the Madrid region.

Spain reported 12,423 new cases on Thursday, 5,585 of them diagnosed over the previous 24 hours. It also recorded 126 deaths since the previous day.

However, attempts to control the pandemic in Madrid have been hampered by political disputes.

In recent weeks there has been a stand-off between the central government and the conservative regional administration, led by Isabel Díaz-Ayuso, which initially resisted the introduction of the partial lockdown. She preferred more localised measures, in the worst-hit parts of the region, which have now been restored.

“We are worried by the Covid numbers and we have to put all mechanisms on the table, basing our decisions on scientific and technical criteria and being proportional,” said Mr Sánchez, responding to the court ruling during a visit to Algeria.

The prime minister suggested that among the legal options he is considering is a state of emergency in Madrid. His government used a nationwide version of the measure throughout the national lockdown between March and June, but it was politically divisive.

Thursday’s court ruling came as a surprise, particularly as the same tribunal had rejected an appeal against the Madrid restrictions by the far-right Vox party on Tuesday. The previous day, the national court rejected a similar complaint by a local lawyer.

“A local person in Madrid right now doesn’t know what they can or can’t do,” said the deputy mayor, Begoña Villacis, of the legal uncertainty.

Another court ruling on the issue is still pending, after Ms Díaz-Ayuso’s regional government filed a complaint last month against the national government for interfering in its jurisdiction by making the restrictions mandatory.

With a bank holiday on Monday, many Madrileños were expected to take advantage of the lifting of the restriction on movement to travel over the weekend. Ms Díaz-Ayuso and the mayor of Madrid, Luis Martínez-Almeida, called on them to avoid such journeys.

Representatives of the central and local governments were meeting on Thursday evening in an attempt to reach a consensus on new measures for Madrid.