US election: Trump refuses to participate in second debate 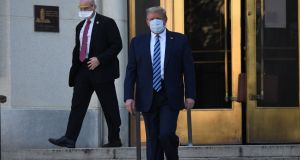 US president Donald Trump has refused to participate in the next presidential debate after the independent commission overseeing the logistics announced it would be a virtual-only event.

In an interview with Fox Business on Thursday Mr Trump described the decision by the Commission on Presidential Debates as “ridiculous”.

“No, I’m not going to waste my time on a virtual debate,” he said during a morning phone-in interview, accusing the independent commission of “trying to protect [Joe] Biden”. “Everybody is,” he said.

Mr Trump also referred to Kamala Harris, Mr Biden’s running mate, as a “monster” during the almost hour-long interview – his first since his release from hospital on Monday following his coronavirus diagnosis.

[Washington correspondent Suzanne Lynch talked to foreign editor Chris Dooley about how the Covid-19 outbreak in the White House has upended the presidential election. To listen, click here]

But even as Mr Trump appeared to reject the terms of the next debate, which was announced by the commission “in order to protect the health and safety of all involved”, many Republicans privately questioned why the president was potentially forfeiting the opportunity to reach tens of millions of Americans, 17 days before the election.

The Trump campaign later in the day suggested that that the second debate – which had already been planned as a “town hall” type event during which audience members in Miami would ask questions – should be rescheduled until October 22nd, the date of the third debate. The final debate should then take place on October 29th, four days before the election, the campaign suggested.

Mr Trump was diagnosed with coronavirus last Friday, but his medical team has refused to confirm when he last tested negative, leaving unanswered questions about when the president contracted the virus, and how long he is likely to be infectious. Several members of Mr Trump’s inner circle have since tested positive.

The president said during his interview that he was “feeling really good” and wanted to resume holding campaign rallies. “I don’t think I’m contagious at all,” he said.

In a video posted to his Twitter feed late on Wednesday, Mr Trump touted the benefits of Regeneron, the drug he was administered in hospital, claiming that it had “cured” him.

“I think this was a blessing from God that I caught it,” Mr Trump said in the video, pledging to offer every American free doses of the medication, despite the fact that it has not been approved by the Food and Drug Administration.

Meanwhile, Ms Harris joined Mr Biden on the campaign trail in Arizona on Thursday, a day after she faced off with vice-president Mike Pence in the only debate between the two ahead of the election in Salt Lake City on Wednesday night.

Mr Pence’s wife, Karen Pence, was criticised for removing her face mask before joining her husband on stage at the close of the 90-minute debate, apparently in breach of the requirement for all those present to wear a face covering while inside the venue.

1 Joe Biden does not want to see guarded Border in Ireland after Brexit
2 Shops, hairdressers and hotels expected to reopen next week
3 Stir-crazy Dutch holidaymakers set to descend on Caribbean island
4 Covid-19: Museums, cinemas set to reopen next week as Varadkar warns of New Year restrictions
5 Bloomberg ranks New Zealand top in fight against Covid-19 - but how did Ireland fare?
Real news has value SUBSCRIBE