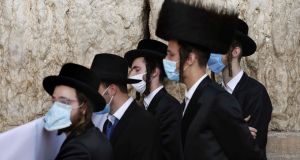 Ultra-Orthodox Jewish worshippers pray during the Sukkot festival, or the feast of the Tabernacles, at the Western Wall in the old city of Jerusalem, on Wednesday. Photograph: Menahem Kahana/AFP via Getty Images)

A hospital director in the Israeli ultra-Orthodox city of Bnei Brak has resigned after disparaging comments he made about the community’s attitude to the coronavirus crisis caused uproar.

With statistics showing infections among the impoverished ultra-Orthodox significantly higher than the rest of Israel, Prof Moti Ravid said that the community’s behaviour was unruly and caused deaths.

“They have been educated to take everything and give nothing for years,” Prof Ravid alleged in a radio interview. “This is one of the worst events in Israeli history. There has not been until today an entire community that casts off the yoke in this manner and kills people,” he added, referring to the fact that parts of the ultra-Orthodox community are not complying with social distancing or mask-wearing regulations.

The hospital administration said that it regretted his “hurtful comments” and stressed that they should not have been made and that they were the complete opposite of the hospital’s position.

Deputy minister Uri Maklev of the ultra-Orthodox United Torah Judaism party said that Mr Ravid was filled with hatred and hypocrisy. He said that for years he had been earning a livelihood from the public that he loathes.

The last few days have seen violent clashes between police and ultra-Orthodox protestors across Israel as mass gatherings during the week-long Jewish festival of Sukkot continued in defiance of restrictions imposed under Israel’s nationwide lockdown.

The Jewish festival period ends this weekend with the festival of Simhat Torah, and health officials have expressed concern that mass prayer gatherings will cause a spike in morbidity. Minister for health Yuli Edelstein said that dancing with the Torah scroll on Simhat Torah is a happy event, “but this year it is a terrible danger”.

A number of ultra-Orthodox rabbis have urged their followers to ignore government Covid-19 regulations and to keep seminaries open for the study of Torah, despite the health risks.

Opposition politicians accuse Israeli prime minister Binyamin Netanyahu of turning a blind eye to the violations because he needs the support of the ultra-Orthodox parties to keep his coalition intact.

Some 22 per cent of those in the ultra-Orthodox community tested for coronavirus are positive, compared with 10.5 per cent in the general population.

Prior to the pandemic, a significant segment of secular Israelis were hostile to the ultra-Orthodox community, and many repeated the mantra that “they don’t work, they don’t pay taxes and they don’t serve in the army”. Now, that hostility has soared and many blame the community for the fact that Israel has one of highest coronavirus infection rates per capita in the world.