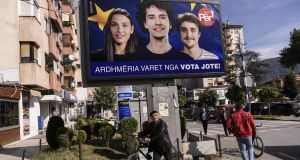 A billboard reading in Albanian “The future depends on your vote!” in the town of Gostivar, on Friday. Photograph: Armend Nimani/AFP

Macedonia is preparing to vote on a historic deal with Greece to change its name and open up its path to deeper integration with the West, amid bitter disputes between supporters of the agreement and those who call it a national betrayal.

The former Yugoslav republic will hold a referendum on Sunday on a pact that would see it adopt the name North Macedonia, in return for Greece dropping opposition to its Balkan neighbour’s bid to join the European Union and Nato.

Athens has blocked those hopes since Macedonia became independent in 1991, in protest at its use of the same name as a region of northern Greece and its perceived claim to that area and the legacy of its ancient ruler, Alexander the Great.

Macedonia’s centre-left government calls this is an unmissable chance to end its dispute with Greece and take a crucial step towards the EU and Nato, and its call for a Yes vote has been backed by a host of top European and US officials who have visited the capital, Skopje, in recent weeks.

Opponents say the deal is a capitulation to Athens that undermines Macedonian national identity, and they criticise the referendum question – which asks if voters are in favour of EU and Nato membership by backing the name deal – for combining elements that they say should remain distinct.

“Here we are, united as never before. Let this generation leave a mark [showing how] we have mustered the courage to secure the future of this multi-ethnic Macedonia,” Prime Minister Zoran Zaev said at his last campaign event this week, with a nod to his country’s 25-per cent ethnic Albanian minority.

“On September 30th, all together, consensually, we have a duty to come out and vote for a European Macedonia because our children and future are at stake,” the Balkan Insight news service quoted him as saying.

The chief proponent of a boycott is Macedonia’s president, Gjorge Ivanov, an ally of it nationalist opposition party, VMRO-DPMNE.

At the UN general assembly in New York on Thursday, Mr Ivanov described the name deal as “historical suicide” and the referendum as “a noose around our necks”.

“This referendum could lead us to become a subordinate state, dependent on another country...We will become a state in name only, not in substance,” he said.

“On September 30th, I will not go out and vote and I know that you, my fellow citizens, will make a similarly wise decision,” he added.

The VMRO-DPMNE party – which only deepened the impasse with Greece during 11 years in power that ended in 2017 – opposes the deal but decided not to call for a boycott of the referendum.

The Yes vote is expected to win but turnout may struggle to reach the 50-percent threshold for the referendum to be legally valid, especially given the absence of accurate voter lists that reflect mass emigration from Macedonia.

Failure would be a blow to the government but – because the referendum is consultative, not binding – it is likely to move to a final vote on the deal in parliament regardless of the result.