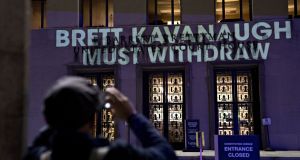 The words “Brett Kavanaugh must withdraw” are projected by demonstrators on to the E Barrett Prettyman United States Courthouse in Washington, DC, on Tuesday. Photograph: Andrew Harrer/Bloomberg

On Thursday, America’s deputy attorney general, who is said to have considered wearing a wire to record White House chaos, will discuss those reports with the president, who also wants Rod Rosenstein to close a probe into Russian complicity in his election. It will be only the second most important event in Washington.

The strangest day in a presidency that has crammed a decade’s history into two years will centre on Brett Kavanaugh, Donald Trump’s nominee to the supreme court, and Christine Blasey Ford, an academic who accuses him of sexual assault when both were teenagers.

Each will appear before the Senate judiciary committee. Kavanaugh denies her claim, as well as a separate allegation of sexual harassment while he was in college. But his serene glide to the bench is now in trouble.

Whether Kavanaugh should be confirmed in the post is impossible to know until the allegation is explored. Democrats want an FBI investigation but Republicans have resisted. Without it, we are left to the tawdry work of weighing the politics rather than the substance of this saddest of rolling stories.

Trump has no good options. If a Republican president with a Republican Senate cannot install a Republican justice, he will exude the one thing he abhors: weakness. If Kavanaugh scrapes home, the president risks alienating women before the midterm elections in November. (“Risks” rather than “ensures” because votes are unpredictable: white women backed Trump over Hillary Clinton in 2016.)

Until Tuesday, when a “female assistant” was hired, the grim prospect beckoned of Blasey Ford’s interrogation by the all-male Republicans on the committee.

On balance, Trump’s political interests are served by defeat. He would not just survive the loss. With the right replacement, he would be better off than he is now.

Kavanaugh was a strange choice in populist times. Georgetown Preparatory School, Yale University, the White House: his life has been an odyssey through the east coast’s most rarefied institutions. His jurisprudence, with its narrow construal of the state’s power to regulate, is classic conservative fare.

None of this is an indictment of his character. His technical merits were never doubted. But his nomination is imaginable under the kind of generic Republican president against whom Trump defines himself.

Had Trump not had the option of a radical outsider, his choice would have made sense. But his rumoured shortlist included at least one.

Amy Coney Barrett is a southerner who attended a mid-western law school. Of her seven children, two are Haitian adoptees. The current Senate thought her fit as a circuit judge just 11 months ago. She does not have much judicial experience but then her opponents do not have much of a “paper trail” to scrutinise.

What Democrats know – or infer – is that such a fervent Catholic would menace Roe v Wade, which forbade states from prohibiting abortion, and Obergefell v Hodges, which secured same-sex marriage throughout the US. She is no liberal’s idea of a supreme court justice. Nor mine. Nor, I wager, Trump’s. But the political reptile in him must see that no judge would be trickier for Democrats to oppose and electrify his own voters quite as much.

There are risks. Unless she were confirmed in a rush, the midterms would become, in part, a referendum on Coney Barrett. Even if the Republicans retain control of the Senate, which is less certain than it was, the freethinking likes of Susan Collins might vote against her.

A second defeated nominee would constitute not just a farce but the end of Trump’s judges-for-votes bargain with evangelicals. He might curse the Federalist Society and other conservative judicial candidate-vetters, but the reputational damage would be his.

To repeat, however, he has no good options. As soon as Blasey Ford came forward, he was choosing between lesser and greater evils.

Facts will be elusive

In a sense, so is the whole system. It is hard to please Blasey Ford and Kavanaugh at the same time. An investigation would reconcile her right to be heard with his right to his good name until evidence erodes it. Even then, facts will be elusive 36 years after the event.

One thing is clear in the murk, and it is the least important: the politics. The interests of Trump and Kavanaugh are not aligned. Failure of the nomination would end one man’s dream. The other would smart for a while before another opportunity opened up: the right’s first credible female nominee since 1981, and the discomfiture of his opponents. If there is such a thing as a pyrrhic defeat, this is it. – Copyright The Financial Times Limited 2018