President ‘categorically and unequivocally denies each and every allegation’ in denial 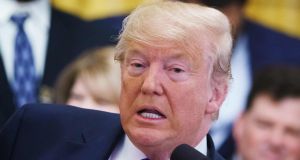 Prosecutors in the impeachment trial of US president Donald Trump have said he must be removed from office for putting his political career ahead of the public trust and seeking to hide that betrayal from Congress and the American people.

In a 46-page trial brief filed on Saturday evening, the seven House impeachment managers, led by intelligence committee chairman Adam Schiff, laid out the case they plan to make against Mr Trump in his Senate trial, beginning on Tuesday afternoon. A 61-page “statement of material facts” was attached.

In a much slimmer filing, the White House replied to a congressional writ of summons notifying Mr Trump of the charges against him and inviting him to attend the trial. The six-page White House filing was a work of blanket denial, stating: “President Trump categorically and unequivocally denies each and every allegation in both articles of impeachment.”

Signed by White House counsel Pat Cipollone and by Jay Sekulow, a personal lawyer to Mr Trump, it also charged the Democrats with “a brazen and unlawful attempt to overturn the results of the 2016 election and interfere with the 2020 election, now just months away”.

The battle lines roughly plotted by the two documents will be engaged in earnest on Tuesday, when the managers are expected to begin making their case against the president. A two-thirds majority of senators would be required to remove Mr Trump from office. That is very unlikely, given a Republican party aligned behind the president and a Senate leadership openly in step with the White House.

Mr Trump must be removed, the Democrats argued in their briefing, owing to the egregiousness of his past misconduct and his ongoing efforts to encourage or coerce foreign tampering in US elections.

“President Trump’s continuing presence in office undermines the integrity of our democratic processes and endangers our national security,” the managers wrote. “President Trump’s abuse of power requires his conviction and removal from office.”

What chance of conviction?

Republicans have never attempted to mount a point-for-point rebuttal of evidence amassed by Democrats that Mr Trump kept up a months-long effort to extract announcements from Ukraine that he thought could damage Joe Biden, his political rival. The effort derailed the career – and may have threatened the personal security of – a respected US ambassador at the wishes of corrupt Ukrainian elements; used the promise of a White House meeting to extract the “deliverable” Mr Trump wanted; and escalated to the suspension by Mr Trump of security aid for Ukraine appropriated by Congress, the evidence indicates.

The Democratic briefing highlighted evidence of the scheme that has emerged since the president was impeached in the House in December. That evidence includes documents and testimony from Lev Parnas, a former close associate of Rudy Giuliani, Mr Trump’s designated point man in Ukraine. Identifying himself as the “personal counsel to President Trump”, Mr Giuliani sought a meeting with Ukrainian president-elect Volodymyr Zelenskiy in May 2019, according to Parnas evidence cited in the briefing.

“President Trump has betrayed the American people and the ideals on which the nation was founded,” the Democratic briefing concludes. “Unless he is removed from office, he will continue to endanger our national security, jeopardise the integrity of our elections, and undermine our core constitutional principles.” – Guardian