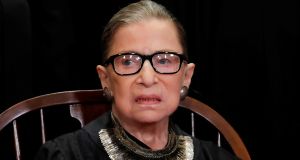 US supreme court judge Ruth Bader Ginsburg has had surgery to remove two malignant growths from her left lung.

It is Ms Ginsburg’s third bout with cancer since she joined the court in 1993.

The 85-year-old had the surgery in New York and will remain in hospital for a few days, the court said.

Doctors found “no evidence of disease elsewhere in the body”, it added.

The court said no additional treatment was planned.

The growths were found during tests Ms Ginsburg had after she fractured ribs in a fall on November 7th.

Ms Ginsburg is the leader of the court’s liberal wing. She has achieved a status rare for supreme court justices, and is known as “the Notorious RBG” to some of her most ardent fans.

In recent days, Ms Ginsburg has been applauded of audiences that turned out for screenings of a new feature film about her life.

Her health is closely watched by liberals and conservatives alike. If she were to step down now, president Donald Trump would choose her replacement, and likely further shift the supreme court in a more conservative direction.

The growths were found incidentally during tests Ms Ginsburg had after she fractured ribs in a fall in her supreme court office on November 7th, the court said.

Ms Ginsburg is expected to remain in the hospital for a few days, the court said.

“If she doesn’t need anything but the surgery, it is a very good sign,” said Dr John Lazar, director of thoracic robotic surgery at MedStar Washington Hospital Centre.

Appointed by president Bill Clinton in 1993, Ms Ginsburg rebuffed suggestions from some liberals that she should step down in the first two years of president Barack Obama’s second term, when Democrats controlled the Senate and would have been likely to confirm her successor.

She has already hired clerks for the term that extends into 2020, indicating she has no plans to retire. – AP