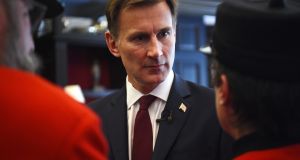 Jeremy Hunt talking with Chelsea Pensioners during a tour of the Royal Hospital Chelsea in London. Photograph: Kirsty O’Connor/PA Wire

Conservative leadership contender Jeremy Hunt has called for a “technology-led solution” to keep the Border open after Brexit, promising that he will persuade the EU to make changes to the Northern Ireland backstop.

In an interview with BBC News on Tuesday night, Mr Hunt said his approach was similar to that of his leadership rival, but that his experience as a negotiator made him better placed to secure changes to the backstop.

“It will be a technology-led a solution. I think everyone thinks that within the next decade we aren’t going to have big border checks when it comes to goods because we’re going to do all these things online, just like the rest of our lives is transformed. And that discussion is what do you do if there’s a disagreement about what technology can do, so you need some mechanisms that resolve those disputes.”

Mr Hunt said he would form a new negotiating team, including the DUP, hardline Brexiteers and Scottish and Welsh Conservatives, to ensure that any new deal could command a majority at Westminster. And he claimed the mood in Brussels had changed in recent months, so that the EU was more open to alternatives to the backstop.

“The EU have not wanted to accept this kind of solution because the hope is that we might stay in this thing called the customs union, where we have to stick to tariffs. But I think they know now that won’t get through parliament.

“So what I’m saying is let’s not be negative, let’s not be pessimistic. There is a way we can do this, but what we have to do is send the right prime minister to Brussels to have those negotiations, have those open discussions, and then I think there is a deal to be done.”

Senior business and trade union figures from both parts of Ireland will be in London on Wednesday for the first meeting of a British government-sponsored panel that will consider alternative arrangements to keep the Border open. The department for exiting the European Union said the members of the business and trade union group have been chosen based on their comprehensive backgrounds in cross-Border supply chains.

The group includes large companies who can represent the views of themselves and their suppliers, as well as smaller companies who rely on cross-Border “just in time” supply chains.

Brexit minister Robin Walker said the group would complement the work of an expert advisory group that met for the first time last week.

“The development of alternative arrangements to replace the backstop has been recognised as a priority by both the UK government and the EU Commission. Accordingly, we have a highly-informed group of experts in trade and customs focused on developing and testing workable solutions.

“But it is vital that any possible alternatives to the backstop are informed by the views of those on the ground, whose goods cross the Border every single day. So I am delighted to chair this important group, which will ensure that the voices of business and trade union representatives are heard.”