Iran a source of ‘belligerence and aggression in Middle East’ – Bolton 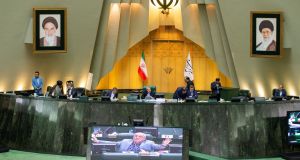 US national security adviser John Bolton denounced Iran as a source of “belligerence and aggression in the Middle East” as he urged the country to enter “real negotiations” about its nuclear programme.

Speaking in Jerusalem, where he held meetings with his Israeli and Russian counterparts, Mr Bolton said “all options remain on the table” if Iran exceeded the uranium enrichment limit that was set out in its 2015 nuclear deal with world powers.

Iran announced last week it would increase its stockpile of uranium, and hinted it could increase enrichment levels to 20 per cent in breach of the 2015 agreement, under which Tehran agreed to curbs on its nuclear activities in return for an easing of sanctions. The US withdrew from the deal last year.

Mr Bolton said there was “simply no evidence that Iran has made the strategic decision to renounce nuclear weapons and open realistic discussions to demonstrate that decision”, warning it would be a “a very serious mistake for Iran to ignore” the limits prescribed by the deal negotiated by former president Barack Obama and other international powers.

He also criticised Iran for supporting organisations such as Hizbullah in Lebanon and Houthi rebels in Yemen, as well as the Assad regime in Syria.

Mr Bolton, who has long taken a hawkish stance on Iran and previously advocated regime change in the country as well as military intervention, was speaking at the end of a three-day visit to Israel, a staunch ally of the United States in the region.

He held a series of bilateral meetings with Israeli leader Binyamin Netanyahu and Nikolei Patrushev, the secretary of the Russian security council, on threats in the region, including the situation in Syria, where Russia is involved on the opposite side to the United States. “We didn’t come with the expectation we were going to solve all the problems, or even most of them,” Mr Bolton said, as the meetings concluded.

The meetings were overshadowed by the deepening standoff between the United States and Iran, which threatens to destabilise the region.

US president Donald Trump warned Iran on Tuesday that it could face “obliteration” in certain areas if it attacked the United States in any way. Mr Trump was responding to Iranian president Hassan Rouhani’s fiery denunciation of the US in a televised address following the imposition of new sanctions on the Iranian leadership by the US administration on Monday.

Dismissing the new sanctions as “useless” and “idiotic”, Mr Rouhani warned that the decision would lead to “certain failure” of the White House’s policy.  He also deemed members of the US administration to be “mentally retarded”. Iran’s foreign minister Javad Zarif – widely seen as a relative moderate within the regime who led negotiations on the 2015 nuclear deal struck by Iran and other powers – also toughened his rhetoric, claiming the US administration was closing the door to diplomacy.

In a tweet, Mr Zarif, who is also due to be sanctioned by the end of the week, according to the US Treasury, claimed the US administration was closing the door to diplomacy.

The war of words between the Iranian and US leadership is the latest manifestation of tensions between Washington and Tehran following the shooting down of an unmanned US drone last week near the coast of Iran. That provocation prompted Mr Trump to consider military strikes against Iranian targets, but he said he cancelled the mission at the last moment, citing concerns about the proportionality of such a response.

Tuesday’s tweets by Mr Trump, however, are the latest sign that Washington is seeking to exert continuing pressure on the regime in Iran, and echoes language used by the US president earlier in his term when he threatened North Korea with “fire and fury like the world has never seen”. The United States and North Korea subsequently met around the negotiation table, however, with two summits taking place between Mr Trump and North Korean leader Kim Jong-un.