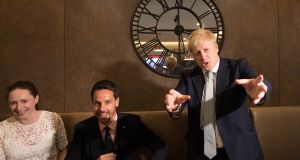 Boris Johnson has toughened his commitment to taking Britain out of the European Union on October 31st, promising a “do-or-die” Brexit and challenging Conservative leadership rival Jeremy Hunt to do the same.

The promise came as Mr Johnson sought to regain the political initiative after four days of headlines about a row with his girlfriend Carrie Symonds that saw police called to their flat early last Friday morning.

In an interview with Talk Radio, Mr Johnson suggested that he would refuse to delay Brexit even if parliament called for a further extension to article 50.

Mr Johnson, who had been criticised for hiding from public view, launched a media blitz on Tuesday as part of a wide-ranging shake-up of his campaign.

Mr Johnson wrote to Mr Hunt on Tuesday, challenging him to rule out delaying Brexit beyond October 31st. However, in an interview with BBC News on Tuesday night, Mr Hunt said that although he was willing to leave the EU without a deal, he would consider an extension if a deal was close.

“I think that October 31st come hell or high water is a fake deadline, because it’s more likely to trip us into a general election before we’ve delivered Brexit, and that would hand the keys to Jeremy Corbyn, and then we’d have no Brexit at all,” he said.

In his Talk Radio interview Mr Johnson refused to answer questions about his relationship with Ms Symonds or about the provenance of a photograph newspapers published this week showing the couple apparently happy. However, he said he liked to relax by making model buses out of wooden boxes and painting them.

“It’s a box that’s been used to contain two wine bottles, right? And it will have a dividing thing. And I turn it into a bus and I put passengers...I paint the passengers enjoying themselves.”

Asked which figure from history he would like to have been, Mr Johnson named Pericles of Athens, a great orator as well as a general and administrator.

“It was said that he thundered and lightened when he spoke. But what he did is he used great infrastructure. He invested in fantastic infrastructure. He developed not just the Acropolis, but the Piraeus port which was integral to the success of Athens.”