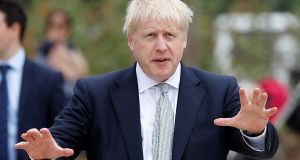 The UK’s likely next prime minister Boris Johnson has at last answered a few questions in an interview with the BBC’s Laura Kuenssberg.

But apart from a few Churchillian exhortations to believe in a bright future for Britain, most of his proposed Brexit “solution” was very old wine in not very new bottles.

This is what he told the BBC, and what it means:

“Key things that you have got to do is take the bits of the current withdrawal agreement, which is dead, take the bits which are serviceable . . . The stuff about European citizens. They need to be properly protected . . . In an unconditional way in UK law.”

The British government and the EU have already each made unilateral declarations protecting each others’ citizens’ rights post-Brexit. Nothing new here.

“Cherrypicking” of the withdrawal agreement’s “best bits” has been repeatedly rejected by the EU.

“The money is more difficult. I think the £39 billion is at the upper end of expectations . . . I think there should be creative ambiguity about when and how that gets paid over.”

The British Brexit bill is seen in Brussels as a legal obligation arising from commitments the UK had a part in making – a position acknowledged by British negotiators and the government.

It is not a bargaining chip, and if treated as such, the EU has made clear, it will simply refuse to negotiate on any other issue until the UK promises to honour the bill and the other elements of the withdrawal agreement – Northern Ireland backstop included.

“There should be an agreement that the solution of the Irish Border questions and all the facilitations which we want to introduce to get that done . . . need to be tackled on the other side of October 31st during what’s called the implementation period.”

There will be no “implementation period” – known in Brussels as “transition” – without a withdrawal agreement, of which it was a key element. And the EU has repeatedly refused to hive off discussion of the backstop until the post-Brexit period.

“You’re going to need some kind of an agreement [prior to Brexit] . . . in order to get an implementation period.”

A new line from Johnson, but some kind of acknowledgment of that reality.

“Nobody wants a hard border in Ireland and nobody believes it will be necessary . . . hold that thought.”

Indeed we will. Though where this fantasy gets us is unclear. Ireland has been unwavering in its promise to honour its obligation to protect the integrity of the single market. Nobody wants a hard border, but its necessity is arguably unavoidable.

“There are abundant technical fixes that can be introduced that make sure you don’t have to have checks at the Border . . . everyone accepts that . . . there are ways that you can check for rules of origin, for compliance with EU goods standards . . . ”

Johnson once again endorses the hoary old argument for “mac fac” – maximum facilitation – and technological “fixes”on the Border, and its latest manifestation in the report of the “alternative arrangements commission”. It ignores the reality, admitted by London, that the technology simply does not exist yet.

Johnson is asking that Brexit take place without any agreement about what happens on the Border. In the meantime, what? No controls of any kind.

Ironically, the European Commission – and Johnson? – admits that the only way to avoid border checks on food and animals, probably the most difficult element of the border challenge, is to maintain regulatory alignment between the UK and Ireland on what are known as SPS regulations. This has been a consistent position of the EU and Ireland, as is the basis of the backstop.

But instead of the UK maintaining alignment with the EU, Ireland, the commission argues , should maintain it with the UK, reversing the logic of Brexit. It is, after all, the UK which is leaving.

Ireland, it argues, could then opt out of such a common SPS area, as could Northern Ireland, if the rest of the UK wished to abandon elements of the EU’s internal SPS regime in order, say, to import chlorinated chickens from the US.

Johnson’s repeated references to “Gatt 24” as a way in which Britain could maintain its status quo trading relationship with the EU – without tariffs – have been subject to heavy criticism in recent days.

“Gatt 24” refers to Article 24 of the General Agreement on Tariffs and Trade (Gatt), the treaty underpinning the World Trade Organisation. The Gatt 24 rule is intended to pave the way to a future trade relationship when an agreement in principle is in place – it is not designed as a substitute for a deal.

Liam Fox, trade secretary and a backer of Johnson’s rival for the Conservative leadership, Jeremy Hunt, has said of Johnson’s description of the Gatt 24 provisions: “It isn’t true, that’s the problem.”