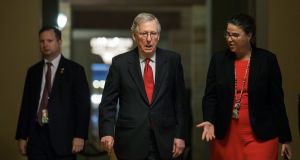 US senator Mitch McConnell on Tuesday officially pulled the plug on the latest plan to repeal the healthcare law, telling senators they will not vote on the measure and effectively admitting defeat in the last-gasp drive to fulfil a core promise of President Donald Trump and Republican lawmakers.

Mr McConnell’s announcement came less than 24 hours after a pivotal Republican senator, Susan Collins of Maine, declared firm opposition to the repeal proposal, all but ensuring that Republican leaders would be short of the votes they needed.

Senate Republicans already tried once this year to approve repeal legislation, an exercise that ended in defeat when senator John McCain gave a thumbs-down in July to kill that repeal proposal.

This time, Mr McConnell, the majority leader, and his fellow Republicans were trying to make one more attempt at passing a Bill, and a deadline was fast approaching: they have only until the end of this week to pass a repeal Bill using special budget rules that shield it from a Democratic filibuster.

Mr McConnell could afford to lose only two of his members. But when he conceded defeat on Tuesday, three members of his conference had already publicly declared their opposition: Ms Collins, Mr McCain and senator Rand Paul of Kentucky.

None of the three senators seemed likely to drop their opposition: Mr McCain detested the partisan process used to push the Bill, Ms Collins had broad concerns about the legislation’s effects on healthcare, and Mr Paul objected to the fundamental architecture of the legislation.

At the White House on Tuesday, Mr Trump expressed his displeasure. “At some point there will be a repeal and replace, but we’ll see whether or not that point is now or will it be shortly thereafter,” Mr Trump said. “But we are disappointed in certain so-called Republicans.”

The failure in the senate was also a disappointment to Republicans in the House, who managed to pass a repeal Bill in May after their own struggles. “We’re a little frustrated that the Senate has not acted on a seminal promise,” speaker Paul Ryan said.

Then he returned to talking up the next big goal for Republicans: overhauling the tax code.