Catalan police ordered to cordon off schools to prevent referendum 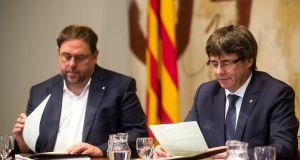 There has been speculation that Catalan president Carles Puigdemont (right) might issue a unilateral declaration of independence. Photograph: EPA/Quique Garcia

Catalonia’s police have been ordered to cordon off schools in the region believed to have been earmarked for voting stations for Sunday’s independence referendum, in the latest attempt by the Spanish authorities to prevent the vote from taking place.

The Catalan state attorney’s office, which answers to the Spanish state, on Tuesday ordered the head of the Mossos d’Esquadra regional police, Josep Lluís Trapero, to evacuate the schools by Saturday morning and ensure nobody enters until late on the following night.

The Spanish government of Mariano Rajoy deems the vote illegal and has pledged to block it. Last week, a judge backed Mr Rajoy’s stance, ordering a civil guard raid on Catalan government premises and the arrest of 14 officials. The civil guard have also seized 10 million voting slips and the government has taken control of part of the region’s finances.

As the October 1st date approaches, focus has turned to the role of the security forces and how they will behave on the day of the vote. In a controversial move, the Spanish government has put the Catalan police under the command of a civil guard officer, Diego Pérez de los Cobos, for actions related to preventing the referendum.

But the Catalan government insists the vote will take place.

“However much warlike fervour they have they are wasting their time, October 1st is going to happen,” Catalan government spokesman Jordi Turull said on Tuesday, in response to the deployment of extra police to the region in recent days.

Footage of reinforcements departing from the southern Spanish city of Huelva to Catalonia, to the cheers and chants of onlookers has gone viral this week, further heightening tensions.

The spokesman in Congress for the governing Popular Party (PP), Rafael Hernando, said that the Spanish government is “co-ordinating and offering reinforcements in order to guarantee safety in the face of a threat which has already been shown with the violence being seen on the streets of Barcelona.”

Mr Hernando did not specify to which alleged violence he was referring.

The Spanish government has admitted that the 2018 budget bill will be delayed due to the Catalan crisis. The PP requires the support of the Basque Nationalist Party (PNV) for approval of the budget, but that party has criticised the government’s handling of the referendum. Finance minister Cristóbal Montoro said that he would not present the Bill as planned this Friday due to the lack of parliamentary support.

As the referendum date nears, uncertainty remains as to what exactly will happen. There have been reports that the Catalan government is considering calling a regional election if the vote is thwarted in a bid to build a stronger pro-independence majority in the local parliament. There has also been speculation that Catalan president Carles Puigdemont might issue a unilateral declaration of independence.

However, the spokesman for his Catalan Democratic Party (PDeCat) in Congress, Carles Campuzano, said that such a drastic move “is not on the roadmap” of the party.

Mr Rajoy, who was visiting Washington on Tuesday, received some support from US president Donald Trump. During a joint press conference, the US leader said Spain “is a great country and should remain united”.