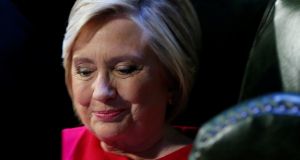 Former US presidential candidate Hillary Clinton has criticised the Trump administration’s ‘hypocrisy’ over the use of private emails. Photograph: Jonathan Ernst/Reuters

At least six senior Trump administration figures are reported to have used private email accounts for official White House business, prompting Hillary Clinton to describe their criticism of her own private server use as “the height of hypocrisy”.

Donald Trump’s son-in-law and senior adviser, Jared Kushner, admitted through his lawyer on Sunday that he had used a private email account in the administration’s early days.

None of those named are believed to have broken the law, which allows public officials to use private addresses as long as official emails are forwarded to government accounts so they can be archived for reasons of transparency.

However, the reports have the potential to cause serious embarrassment to the US president, whose 2016 election campaign was built in part on regular and heavy criticism of Clinton for her use of a private email server while secretary of state.

Clinton was the subject of regular chants of “lock her up” at Trump rallies during the election campaign.

In her recently published book on the campaign, What Happened, the former first lady and senator identified the investigation into her emails and former FBI director James Comey’s handling of it as a major reason for her defeat.

Speaking to Sirius XM radio on Monday, Clinton hit out at “the hypocrisy of this administration, who knew there was no real scandal, who knew that there was no basis for all their hyperventilating.

“We’re finding with the latest revelations - they didn’t mean any of it. It’s just the height of hypocrisy.

“It is something that if they were sincere about I think you’d have Republican members of Congress calling for an investigation. I haven’t heard that yet.”

Comey first cleared Clinton of wrongdoing over her emails, though he criticised her conduct, at a press conference in July 2016.

He then announced 11 days before the November presidential vote that new emails related to Clinton had been discovered on a laptop owned by Anthony Weiner, the disgraced estranged husband of Huma Abedin, a key Clinton aide.

Speaking to NBC this month, Clinton said she “would’ve won” if Comey had not intervened. “It stopped my momentum. It drove voters from me,” she said. “And so that, in terms of my personal defeat, was the most important factor.”

House oversight committee chair Trey Gowdy and ranking Democrat Elijah Cummings wrote to the White House general counsel and the state department on Monday requesting details of all use of private email by government employees, the Associated Press reported.

A report concerning Kushner first emerged in Politico on Sunday. Soon after, Kushner’s lawyer, Abbe Lowell, acknowledged that between January and August his client either received or responded to dozens of emails involving White House business using a personal account.

On Monday, Newsweek reported that Ivanka Trump had also used a personal account while she was acting as an unpaid adviser to her father.

The same paper named the other four advisers as having used personal accounts, citing leaks from current and former government officials.

Clinton set up a personal server for all her electronic correspondence while secretary of state, using it to handle tens of thousands of emails and store some classified information.

The traffic relating to the Trump administration was reportedly much less significant, described by officials as sporadic.

It was, however, said to have included correspondence with reporters.

In Kushner’s case, his lawyer said, the emails usually involved “forwarded news articles or political commentary and most often occurred when someone initiated the exchange by sending an email to his personal, rather than his White House, address”.

Given Trump’s stance on the issue and the sensibilities of his core supporters, the wisdom of the use of a private address by an official in the administration can be called into question.

On Monday, the White House press secretary, Sarah Huckabee Sanders, characterised the use of private email accounts within the Trump administration as “very limited”.

“White House counsel has instructed all White House staff to use their government email for official business, and only use that email,” she said.