Corbyn says there are some ‘positive’ aspects to leaving EU 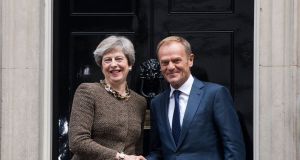 British prime minister Theresa May welcomes president of the European Council Donald Tusk, ahead of a meeting in Downing Street. Photograph: Will Oliver/EPA

Jeremy Corbyn has played down the prospect of a Labour government holding a second referendum on Brexit, and said there were some “positive” aspects to leaving the European Union. Mr Corbyn was speaking in Brighton, where Labour is holding its annual conference, after London mayor Sadiq Khan suggested a second referendum could be in the party’s next manifesto.

“We are not planning any referendum. Sadiq is obviously thinking through all scenarios and possibilities. He represents a city which overwhelmingly voted for Remain. As you know, the referendum result across the country was a majority to leave,” Mr Corbyn told Sky News.

In a separate interview on Five News, the Labour leader was asked if he saw any opportunities in Brexit.

“I wouldn’t go so far as to say that it is all going to be positive. It is going to be difficult and complicated. But there are positives there,” he said.

Pro-EU Labour MPs, who were unhappy that the conference failed to schedule a vote on Brexit policy, on Tuesday welcomed Mr Khan’s suggestion that a second referendum was possible, and that other senior figures such as shadow chancellor John McDonnell had not ruled it out.

Shadow Brexit secretary Keir Starmer criticised the government’s handling of the negotiations, declaring that Labour were now “the grown-ups” on the issue.

“We stand ready to take charge of negotiations,” he declared.

Theresa May on Tuesday met European Council president Donald Tusk in Downing Street, telling him that her speech in Florence last Friday had been intended to create momentum in the Brexit talks and that EU negotiators should respond in the same spirit.

Mr Tusk said that, despite the speech, there was not yet “sufficient progress” on the divorce bill, citizens’ rights and Ireland for negotiations to progress to the second phase, when the two sides will discuss Britain’s future relationship with the EU.

Speaking outside Downing Street, he welcomed what he described as a new, constructive and realistic tone from the British government.

“This shows that the philosophy of having a cake and eating it is finally coming at an end – at least I hope so,” he said.

“We will discuss our future relations with the UK once there is so-called sufficient progress. The sides are working and we work hard at it. But if you ask me . . . I would say there’s no sufficient progress yet, but we will work on it.”

A Downing Street spokesperson said that Ms May began the meeting by restating her wish for “a bold and unique new economic partnership” with the EU, based on a joint commitment to free trade and high standards.

“The PM and President Tusk welcomed the good progress that had been made on citizens’ rights in the talks so far, and restated their commitment to finding a positive solution to the issue of the border between Northern Ireland and Ireland,” the spokesperson said.

“The PM also stressed the importance of agreeing a period of implementation once Britain leaves the EU in March 2019. She said this would build a bridge to that new relationship that ensures the process is smooth and orderly and creates as much certainty as possible for everyone.”