Germany’s far-right party played Merkel at her own game 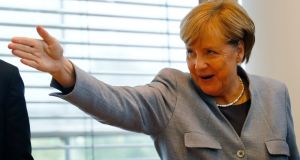 For a dozen years, Angela Merkel has been Germany’s political magpie, quick to spot and nab others’ glittering ideas and incorporate them into her own political nest.

On Sunday she was robbed of one million voters by a new far-right magpie: the Alternative für Deutschland (AfD).

The far-right party’s arrival into the German Bundestag has exposed the limits of the Merkel method – and set the clock ticking on her departure.

To secure a fourth term, and draw even with her mentor Helmut Kohl, Merkel has three items at the top of her to-do list. First she has to cobble together an untested, three-way coalition with two ideologically opposed parties: the economically liberal Free Democrats (FDP) and the centre-left Greens.

This will be an interesting exercise, given the smaller parties’ opposing views on everything from euro reform to environment protection and, in particular, the diesel scandal.

Second she has to placate her furious Bavarian allies, who fell into line behind her and dropped their hard line on refugees and border controls. Their reward: a 10-point drop in support.

But the biggest challenge is the AfD. On Monday the German leader vowed to take on the AfD. Her hope is to lure back some of the 60 per cent of the party’s 3.6 million supporters who admitted theirs was a protest vote.

Four years after the party was founded in the euro crisis, the AfD is the sorcerer’s apprentice of German politics. It has summoned up uneasy spirits of racism, xenophobia and ultra-nationalism and tapped into deep-seated angst and base instincts of voters.

But its breakthrough as the Bundestag’s third-largest party lay in activating 1.47 million non-voters and pulling in almost two million votes – a third of its total vote – from other political parties.

Its voters are drawn from Germany’s middle: middle income, average education, and age brackets: predominant in the 30-44 and 45-59 age groups. It was almost as popular among traditional workers as the SPD.

More popular among men than women, it polled best in Germany’s east. In Saxony it was the strongest political party but it also polled relatively strongly in Germany’s conservative southwest, offering political asylum to more than one million homeless German conservatives fleeing the centrist Merkel CDU.

With promises to boost pensions and welfare, the AfD also attracted half a million SPD voters and 400,000 (11 per cent) Left Party voters. Its broad appeal and pull from other political camps gives lie to the idea all AfD voters are “Nazis” – the preferred strategy to date of politicians and journalists when tackling the party.

“Its voters had questions about fundamental issues, such as how will things continue with immigration and the welfare state,” said Prof Werner Patzelt, a Dresden political scientist who has studied the AfD and anti-Islam Pegida movement. “Until now there was a fallacy that the AfD was merely a racist party and that, if you tackle racism and call its voters racists, you’ve solved the AfD problem.”

The only way to tackle the AfD effectively in parliament will not be with emotional attacks, he says, but to use the parliamentary rules of engagement and calmly expose their policy contradictions.

“If the AfD want to talk in the Bundestag like they’re down the pub, let them do just that and they will scare off intelligent people on their own,” said Patzelt.

On Monday, in classic Merkel style, the German leader denied her strategy of ignoring the AfD had failed while simultaneously promising to win back the voters that same strategy had driven to the far-right party.

It was the closest we will probably get to an admission of error for neglecting her party’s conservative wing, closing the barn door after they bolted to the AfD.

Behind Monday’s bleak headlines for her and the CDU’s 33 per cent result, it’s worth recalling how the leader scraped to power on just 35 per cent in 2005; four years later she scored a second term after finishing just 0.8 points ahead of Sunday’s result.

Merkel will probably pull together a coalition to secure a fourth term but, facing into bruising coalition talks after being heckled on the campaign trail, this is her last round at the rodeo.