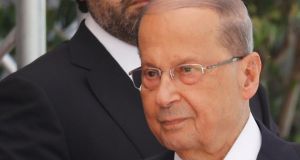 President Emmanuel Macron will receive Michel Aoun, the president of Lebanon, for a three-day state visit starting on Monday that is charged with historic symbolism.

Mr Aoun, who will turn 84 at the end of this month, will be flown from Orly airport to Les Invalides in a helicopter. The Lebanese flag will deck the Champs-Élysées.

Mr Aoun will meet with the French prime minister, the speakers of both houses of parliament and the mayor of Paris, as well as Macron. The Élysée will hold a state dinner tonight in his honour.

This is the first state visit of Macron’s five-year term in office. For this correspondent, who was bombarded by the then general’s forces nightly for six months in 1989, the announcement of Mr Aoun’s visit was shocking.

Mr Aoun, a major figure in the latter part of the 1974-1990 Lebanese civil war, launched a “war of liberation” against Syrian troops in Lebanon in 1989, then attacked his Christian allies in the Lebanese forces militia.

In further fighting he was driven out of the presidential palace in Baabda in October 1990. The UN estimates that at least 2,700 lives were lost in the Aoun wars. Other estimates range much higher.

After 15 years in exile in France, Mr Aoun returned to Beirut in 2005, “a changed man” according to Marc Cochrane, the former Irish honorary consul in Beirut, who is Lebanese on his mother’s side.

“At the time, most of the Sunni community and a significant segment of the Maronite population considered Mr Aoun to be a dangerous lunatic whose aspirations to become president had to be thwarted at all cost. He is turning out to be a reasonably balanced president.”

Today, all the civil war-era militias, as well as Lebanese Sunnis under prime minister Saad Hariri, participate in Mr Aoun’s administration. Hizbullah are fighting alongside Assad’s troops in Syria, while Lebanese Sunnis support Assad’s opponents. Yet the Lebanese maintain a truce within their borders, out of mutual interest.

Lebanon was without a head of state for 29 months before Mr Aoun’s election, which followed 45 failed attempts to reach a quorum in the Lebanese parliament. In the end Mr Aoun’s elevation to the office he always coveted was the result of a deal between Iran and Saudi Arabia.

“For all their corruption, rivalry and differences, the Lebanese managed to elect a president, form a government and agree on a new electoral law,” Mr Bounajem says. “France is attempting to strengthen that by receiving Mr Aoun in Paris.”

Lebanon mirrors Macron’s region-wide efforts to balance France’s relations with Sunni and Shia, with Saudi Arabia and Iran. He received Mr Hariri on September 1st. It is, French diplomats note, the tradition for Paris to honour every Lebanese president with a state visit.

Like the protagonists of the Troubles in Northern Ireland, the Lebanese have matured. Rima Tarabay, by birth a Maronite Catholic, was a member of the Lebanese forces militia. She later became press attaché to the slain Sunni prime minister Rafiq Hariri, and now represents Mr Hariri’s son Saad in Europe.

Ms Tarabay is realistic about Lebanon’s new-found harmony. “They’re sharing the spoils,” she says of the country’s leaders.

“Hizbullah [whose military wing is listed as a terrorist organisation by the EU] is the dominant power. I’m waiting for our government to move towards secularism, equal rights for women and protection of the environment.”

French diplomats are at pains to stress even-handedness towards all Lebanese. Yet France’s historic ties are with the Maronites, who Louis IX promised to protect during the seventh crusade, in 1250.

French general Henri Gouraud carved the “state of Greater Lebanon” out of the mandate of Syria in 1920, as a gift to the Maronites. Under the “national pact” sponsored by France in 1943, the president of Lebanon must be a Maronite, while other positions are reserved for Sunni and Shia.

“Lebanon was created by the French for the Christians,” says Ms Tarabay. “It’s time the French recognise their shared responsibility for sectarianism in Lebanon.”

Mr Aoun is the only Christian head of an Arab state. He and Macron will inaugurate an exhibition on Middle East Christians at the Institut du Monde Arabe tonight. French diplomats have stressed that it is about “the Christian contribution to the Middle East, and protecting minorities”.

Some French conservatives have supported Mr Aoun since the 1980s, when the socialist Mitterrand administration preferred to ignore him.

As a close friend of Mr Aoun, Frédérique Deniau, the widow of the politician and academician Jean-François Deniau, is thrilled about the state visit. She visited Mr Aoun in his bunker in 1989, returned with him to Beirut in 2005, and helped draw up his agreement with Hizbullah in 2006.

“You say Aoun got a lot of people killed,” Deniau shrugs, sitting in her apartment near the Seine, surrounded by memorabilia of her Lebanese friendships. “Yes. So did the [second World War French] Resistance.” She compares Mr Aoun’s subsequent reversal to Gen Charles de Gaulle’s post-second World War friendship with German chancellor Konrad Adenauer.

To this gracious French woman, the man who many regarded as a mad general is a Lebanese patriot.

“It was painful for Aoun to reconcile with Syria,” Deniau says. “He knew Lebanon could not afford to have Syria as an enemy on its border ... He saved Lebanon twice; the first time by saying no to Syria; the second time by reconciling with it ... Now the whole region is falling apart, and little Lebanon defies all the odds by surviving.”