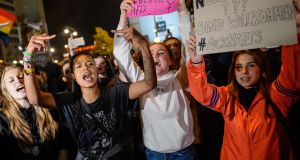 Opponents of AfD protest on Berlin’s Alexanderplatz after the far-right party secured 13 per cent of the vote. Photograph: Jens Schlueter/Getty Images

The four-year-old populist party will enter the German Bundestag as its third strongest party with around 90 seats, after tapping voter concerns over immigration and security to secure 13 per cent of the vote.

Support for Dr Merkel’s centre-right CDU collapsed eight points to around 33 per cent, according to preliminary results, the party’s worst result in almost 60 years.

“We have to win back the AfD voters by solving problems and by addressing their concerns through good politics,” said Dr Merkel to supporters in Berlin.

Her outgoing grand coalition partner, the centre-left Social Democratic Party (SPD), appears headed for the opposition benches after winning just 20.6 per cent in projections, its worst result since 1949.

“This government is over, this grand coalition was dropped,” said SPD leader Martin Schulz, calling the AfD’s arrival in parliament a historical “rupture”.

Dr Merkel’s most likely option to remain in power is a three-way alliance with the pro-business Free Democratic Party (FDP), back in parliament with a projected 10.5 per cent, and the centre-left Greens on around 9 per cent.

However, such an untested alliance would be an uneasy option for Dr Merkel, and risk increased uncertainty for Germany’s European allies.

On Sunday evening FDP leader Christian Linder made clear his party opposed French plans to reform the euro area with its own finance minister and budget. French president Emmanuel Macron is expected to present such proposals later this week.

“Providing money for French state spending or to compensate for Silvio Berlusconi’s mistakes is inconceivable for us and will be a red line,” said Mr Lindner.

Green Party leaders said they would be “no easy partner” and that “difficult talks lie ahead”.

All established parties agreed they would refuse to co-operate in the Bundestag with the AfD, variously calling them racist, xenophobic and anti-democratic. But the Bundestag’s newest member shrugged off the attacks.

“Millions of Germans have given us their trust for constructive opposition work, and we will deliver,” said Dr Alice Weidel, AfD campaign co-leader. She also promised to push for a Bundestag inquiry into Dr Merkel’s refugee policies that saw over one million asylum seekers enter the country in 2015 and 2016.

An hour after polls closed on Sunday evening, hundreds of people gathered for spontaneous protest on Berlin’s Alexanderplatz, before the AfD election party, shouting “Nazis out!” and “All of Berlin hates the AfD”.

As the crowd swelled, police in riot gear moved in and clashed with protestors who tried to enter the AfD party.

German Jewish groups expressed alarm at the AfD’s election result. Josef Schuster of Germany’s Central Jewish Council, said the party “tolerates far-right thoughts and agitates against minorities” and called on other parties to “reveal the true face of the AfD and unmask their empty, populist promises”.

Sunday’s election puts Dr Merkel on a path to equal the 16 years in office of her mentor, Helmut Kohl, but analysts suggest the dramatic losses have left serious dents on her authority.

“The discussion about her successor is going to pick up pace,” said Dr Gero Neugebauer, a Berlin political analyst. “Her partners in Europe will see a leader who is no longer as strong at home.”

Given previous experiences Germany’s partners will be waiting a long time for a functioning government in Berlin to kick-start the EU reform debate.

Talks are likely to drag on into November, early December or even longer. On Sunday evening, Dr Merkel said she would not even begin coalition talks until after a snap state election in three weeks in Lower Saxony.