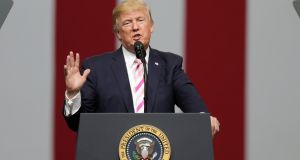 US president Donald Trump on Sunday was considering a replacement to his controversial executive order barring travel to the United States from several majority-Muslim countries.

The current ban, which was enacted in March and expires on Sunday evening, extended to travellers from Iran, Libya, Somalia, Syria and Yemen. The new order could fall short of a complete ban, instead tailoring travel restrictions on a country-by-country basis.

Mr Trump received a set of policy recommendations on Friday from acting secretary of homeland security Elaine Duke and was briefed on the matter by other administration officials, including attorney general Jeff Sessions and secretary of state Rex Tillerson, a White House aide said.

As of Friday, the president had not made a final decision as the contents of the new order and which nations would be affected, leaving open the possibility that the list could be expanded.

He was spending the weekend at his golf club in Bedminster, New Jersey. Rather than a total ban on entry to the United States, the proposed restrictions would differ by nation, based on co-operation with American security mandates, the threat the administration believes each country presents and other variables, Miles Taylor, an aide to Ms Duke, said on Friday.

After the September 15th bombing attack on a London train, Trump wrote on Twitter that the new ban “should be far larger, tougher and more specific – but stupidly, that would not be politically correct”.

The expiring ban blocked entry into the United States by people from the six countries for 90 days and locked out most aspiring refugees for 120 days to give Trump’s administration time to conduct a worldwide review of US vetting procedures for foreign visitors.

Critics have accused the Republican president of discriminating against Muslims in violation of constitutional guarantees of religious liberty and equal protection under the law, breaking existing US immigration law and stoking religious hatred. Some federal courts blocked the ban, but the US supreme court allowed it to take effect in June with some restrictions. The supreme court will hear arguments on October 10th on whether the current ban discriminates against Muslims in violation of the US constitution, as lower courts previously ruled.