Frauke Petry, the co-leader of Germany's far-right AfD announces she will not be part of the parliamentary group of her anti-immigrant party and walked out of a news conference without answering questions. Video: Reuters 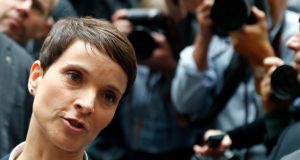 Hours after the historic victory of the far-right Alternative für Deutschland (AfD), the first item on the agenda is the split.

Co-leader Frauke Petry left her jubilant party colleagues thunderstruck on Monday morning when she announced she would not join the AfD parliamentary party in the Bundestag.

After the party won 12.6 per cent in Sunday’s federal election, campaign co-leader Alexander Gauland announced his party would “hunt” Chancellor Merkel in parliament.

On breakfast television Ms Petry said such language was “not perceived as constructive” by the party’s conservative voters.

In a joint press conference with Mr Gauland, she promised to “engage actively with politics in the best conservative sense”.

“After long consideration I’ve decided not to belong to the AfD parliamentary party,” she said - and walked out.

It is a remarkable Saul-to-Paul conversion for Ms Petry. Two years ago she ousted the AfD’s economic liberal founder, Bernd Lucke, and radicalised the party in the refugee crisis, suggesting border guards could shoot illegal entrants to Germany.

Since then she has become isolated in the party and declined to lead the federal election campaign. But on Sunday she won a Bundestag seat directly in her Saxony constituency with 35.5 per cent - the highest of all party candidates.

Her move will put pressure on remaining AfD leaders, and the party’s 94 new MPs, to either distance themselves from their leaders’ radical language and join her - or stay with Mr Gauland.

‘Right to be proud’

In the campaign Mr Gauland, head of the AfD nationalist wing, suggested Germany had the “right to be proud” of its soldiers’ achievements in two world wars.

He wasn’t alone: even Alice Weidel, head of the more moderate liberal wing, claimed German immigration amounted to a “systematic destruction of civil society” by a “marionette” government in thrall to the victorious allies of 1945.

Left behind in the AfD press conference, Mr Gauland said he did not think Ms Petry’s gamble would pay off.

“I don’t see that further parliamentarians will follow her,” he said.

Monday’s split was the third in the history of the four year-old party. When AfD founder Bernd Lucke was ousted, he and his followers formed a new party, but with little success.

Last year Ms Petry’s AfD co-leader Jörg Meuthen and his allies split with their own parliamentary party in the southwestern state of Baden-Württemberg. They were furious at the refusal of an MP to resign over anti-Semitic remarks. Ms Petry backed the MP against Mr Meuthen, though the split was eventually reversed.

After her dramatic stunt Ms Petry - who was facing into a difficult re-election campaign as party leader - said she hoped a more moderate, conservative AfD was likely before the next election in 2021.

“I would like that issues dominate and not the off-side remarks remarks we heard in the past,” she said.

While the CDU has a mandate to lead Germany’s next federal government, tricky weeks lie ahead. Since polls closed her likely coalition partners - the liberal Free Democratic Party (FDP) and centre-left Greens - have argued in public with themselves and each other over the cost, risks and benefits of entering government.

The official - if preliminary - result showed turnout in Sunday’s election was steady on 76 per cent. The CDU won 33 per cent, down from 41 per cent in 2013, while its centre-left grand coalition partners, the Social Democratic Party (SPD) scored its worst ever result with 20.5 per cent.

The FDP took 10.7 per cent, returning to parliament after four years outside, while the Greens and Left Party were stable on 8.9 and 9.2 per cent respectively.

While Dr Merkel put a brave face on the results, pointing out that no government can exclude the CDU, election analysis showed voters abandoned the increasingly centrist party over its refugee and security policies.

For Dr Merkel, securing a fourth term will mean going into battle on all fronts.

As well bickering with FDP and Greens, Dr Merkel has to placate her Bavarian allies, furious after losing a staggering 10 points.

Senior CSU officials said on Monday this had left the CDU-CSU alliance exposed to attack on its right flank by the AfD.

The Bavarian CSU, traditionally more conservative than the CDU, has been in power in the southern German state for 51 years. With just a year to recover its conservative profile before Bavaria’s state election, CSU officials have promised to take a hard line in Berlin coalition talks.

In a taste of turbulence to come, Mr Seehofer has suggested the party should reconsider its decades-old alliance with Dr Merkel’s CDU.

After the rise of the AfD, the end of Germany’s centre-right alliance would be the second rupture of this election.

In a separate referendum, voters in Berlin on Sunday voted to keep open the city’s second airport, Tegel.

The result was a setback for the city-state government, which insists Tegel must close six months after the opening of the new international airport - five years and counting behind schedule.