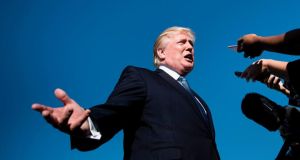 US president Donald Trump: his war with the sporting world has extended to basketball, after he withdrew a White House invitation to basketball team the Golden State Warriors. Photograph: Brendan Smialowski/AFP/Getty Images

The standoff between US president Donald Trump and the National Football League continued on Monday as Mr Trump defended his outburst against footballers who kneeled during the national anthem, saying it had “nothing to do with race”.

In a series of tweets on Monday morning, Mr Trump said that the issue of kneeling was about “respect for our Country, Flag and National Anthem,” and “has nothing to do with race”, adding “[the] NFL must respect this.”

“Many people booed the players who kneeled yesterday (which was a small percentage of total). These are fans who demand respect for our Flag!”

NFL players across the country kneeled and locked arms during matches across the country on Sunday, in a show of defiance against the US president, who lashed out at NFL players at a rally in Alabama on Friday night, telling the crowd: “Wouldn’t you love to see one of these NFL owners, when somebody disrespects our flag, to say ‘get that son of a bitch off the field right now . . . he is fired’?”

Mr Trump was referring to the practice of kneeling during the national anthem, started by NFL player Colin Kaepernick last year, in protest at the shooting dead of black civilians by white police officers.

‘Slap in the face’

Eric Winston, president of the NFL players’ association, said that Mr Trump’s comments were “a slap in the face to the civil rights heroes of the past and present”, while NFL commissioner Roger Goodell added: “Divisive comments like these demonstrate an unfortunate lack of respect.”

New England Patriots quarterback Tom Brady, who has previously said he regards Mr Trump as a friend, said on Monday he disagreed with the president’s remarks. “I certainly disagree with what he said. I thought it was just divisive,” Brady told Boston’s WEEI radio.

Mr Trump’s war with the sporting world has also extended to basketball, after he withdrew a White House invitation to basketball team the Golden State Warriors after one of their players, Stephen Curry, said he did not want to attend.

As the controversy continued at the start of a busy week for Congress, with Republicans seeking to reach agreement on healthcare and tax reform, Mr Trump’s son-in-law and adviser Jared Kushner found himself at the centre of an email controversy.

The issue is particularly contentious in light of Mr Trump’s relentless criticism of Hillary Clinton’s use of a private email server while secretary of state during the presidential election campaign.

Meanwhile, political attention will turn to Alabama on Tuesday where the Republican primary to select the candidate to contest the senate seat vacated by attorney general Jeff Sessions is taking place.

Former judge Roy Moore and senator Luther Strange are vying for the nomination, which has become a referendum of sorts on the Trump presidency.

On Friday, the US president flew to Alabama to campaign for Mr Strange, who has stressed his strong ties with the president during the campaign.

The race has thrown up divisions within the Republican Party between the more traditional and Trump-friendly wings of the party.