Fresh evacuations force 50,000 people in the northern San Francisco away from homes 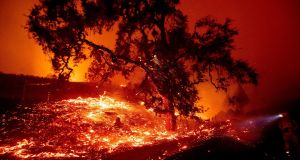 Embers fly from a tree as the Kincade Fire burns near Geyserville in California. Photograph: AP

Californians braced for power cuts and a “potentially historic” wind event on Saturday as a growing wildfire prompted fresh evacuations for 50,000 people in the northern San Francisco Bay Area.

The tumultuous Kincade fire spread to 10,301 hectares in the wine-growing region of Sonoma county, with meteorologists warning of severe, windy conditions beginning Saturday night that could see gusts of up to 128km/h. The entire communities of Healdsburg and Windsor were ordered to evacuate.

The Sonoma county sheriff’s office said it is expected to be the biggest evacuation in the county in more than 25 years.

“The winds are expected anywhere between 8pm and midnight and from all reports they’re expected to be extremely strong,” said Brian Vitorelo with the California Department of Forestry and Fire Protection.

The Kincade fire broke out late on Wednesday night and has so far destroyed nearly 50 structures.

From @NWSBayArea this AM: “A potentially historic, long duration, extremely critical offshore wind event is forecast to occur beginning . . . tonight and persist through early Monday. The storm prediction centre has placed North Bay under the highest fire weather risk. #CAwx#CA”

Meanwhile, millions across the state will have their power cut again as California’s largest utility, Pacific Gas & Electric (PG&E), said it would shut off electricity for the third time in as many weeks.

PG&E said it would begin blackouts in the afternoon for about 940,000 homes and businesses in 36 counties for 48 hours or longer throughout the San Francisco Bay Area, wine country and Sierra foothills. That’s about 90,000 more customers affected than previously predicted.

Two previous power shutdowns were done amid concern that gusty winds could disrupt or knock down power lines and spark devastating wildfires.

Another blaze that forced evacuations of 50,000 residents in suburbs north of Los Angeles grew to 4,615 acres overnight. The Tick fire, which started on Thursday, has destroyed nine homes and businesses while threatening 10,000 more, according to firefighters. While some evacuees were allowed back into their homes as of Friday night, certain mandatory evacuation orders still remained.

California’s governor, Gavin Newsom, has declared a local emergency to assist with battling the blazes, and thousands of firefighters have been deployed to both locations.

PG&E has a history of sparking wildfires throughout the state, including two of the deadliest disasters in recent California history.

Firefighters battling the Kincade fire discovered what appeared to be a broken jumper by a PG&E transmission tower that had lost power. Though PG&E had shut off power to the area as part of planned shutoff, the transmission lines remained energized, the utility said. The cause of the Kincade fire is still under investigation.

The power shutoff in Geyserville created a dangerous challenge when it came time to evacuate residents as the blaze crept nearer. Typically during evacuations, local authorities deploy reverse 911 calls to alert individual residents. With the power out, evacuees reported being awakened in the early hours by frantic knocks on their front doors.

In San Diego county, where other small wildfires are burning, helicopters were forced to make the evacuation orders over loudspeaker because the power was shut off. San Diego runs its own utility and is conducting its own planned shutoffs during high-fire weather conditions.

Californians in the vicinity of the fires faced a weekend of smokey haze and bad air quality. Sonoma county, where the Kincade fire rages, advised residents to cancel plans and stay indoors.

Though nine wildfires are currently burning throughout the state, none have reached the level of death and destruction witnessed in the past few years. Nevertheless fears remain, especially among those who lived through the devastation of the previous fires. The Kincade fire was starting to skirt along the path of the 2015 Valley fire, which killed four people and burned through more than 76,000 acres.

The harsh fire weather conditions have spread beyond the state, kicking up flames in parts of Baja California, just across the border from San Diego in Mexico.

1 Why Sinn Féin will not call the State by its name
2 McDonald rejects idea SF public meetings ‘an affront to democracy’
3 Coronavirus: Questions over Ireland’s readiness for what might come
4 Maureen Dowd: For the White House parasite, all restraint has gone
5 What evidence is there that the IRA still controls Sinn Féin?
Real news has value SUBSCRIBE