Two others wounded in attack at military base in Siberia 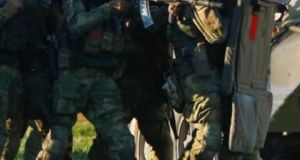 Shootings and other violent incidents plagued the Russian military in the 1990s and early 2000s. Photograph: file image

A soldier has killed eight fellow servicemen in Siberia and wounded two others before being apprehended, according to the Russian defence ministry.

The ministry said the incident happened at a military base in the town of Gorny in the Baikal Lake region about 93 miles (149km) north of the border with Mongolia.

It said the soldier apparently opened fire in a “nervous breakdown over personal problems unrelated to his military duties”.

A deputy defence minister was heading to the base to conduct an investigation.

Shootings and other violent incidents plagued the Russian military in the 1990s and early 2000s when it suffered from desperate cash shortages and low morale.

They have become relatively rare in recent years as conditions in the military have improved.– AP