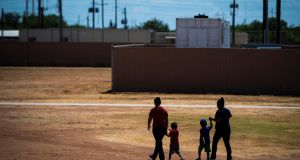 A private prison guard physically assaulted a five-year-old boy at an immigration detention centre in Texas, according to a complaint filed with the Department of Homeland Security (DHS).

Advocates for the boy and his mother expect the family to be deported on Friday and asked the US government to halt the deportation to investigate the alleged assault. The advocates also said the family, who are anonymous for safety reasons, face imminent harm or death in their home country of Honduras.

The alleged assault occurred in late September, when the boy was playing with a guard employed by the private prison company CoreCivic who had played with the boy before.

The five-year-old tried to give the guard a high-five, but accidentally hit him instead, angering the guard, according to a complaint seen by the Guardian. The guard then allegedly grabbed the boy’s wrist “very hard” and would not let go.

“The boy’s mother told the guard to let go and tried to pull her son’s hand away, but the guard kept holding on,” according to the complaint. “He finally released the boy and threatened to punish him if he hit him again.”

The complaint said the boy’s hand was swollen and bruised and he was treated with pain medication and ice at the South Texas Family Residential Center in Dilley, in a remote part of the state about 160km from the US-Mexico border.

The Dilley detention center has been controversial since it opened in 2014. Dilley can hold 2,400 people, the most of any family detention centre in the country, and in March 2019 held at least 15 babies under the age of one.

“Since the assault, the boy is afraid of male officials at the jail, goes to the bathroom in his pants, bites his nails until they bleed, and does not want to play, sleep, eat, or bathe,” the complaint said.

The Guardian contacted US Immigration and Customs Enforcement (Ice), the Homeland Security agency which oversees immigration detention, and CoreCivic for comment, but they had not provided a response at the time of publication.

Katy Murdza, advocacy manager for the Dilley Pro Bono Project, which sends volunteers into the Dilley detention centre to help families, met with the mother on Wednesday.

Ms Murdza said the mother is fearful of her imminent deportation and is upset about what happened to her son because she had little power to protect him.

“She was unable to prevent someone from hurting her child and while she has tried to report it, she hasn’t received any information on what the results are, so she still does not have control of whether the detention centre let that staff member back in,” Ms Murdza said.

“When people are detained and it’s hidden from the public, these sorts of things happen and there are probably many other cases that we have never learned about that could be similar to this,” Ms Murdza added.

The American Academy of Pediatrics said in March 2017 that no migrant child in the custody of their parent should ever be detained because the conditions could harm or re-traumatise them.

The US government can release asylum-seeking families in the US while they wait for their cases to be heard in court, but Donald Trump’s administration favors expanding detention and has tried to extend how long children can be held in detention centers.

Katie Shepherd, national advocacy counsel with the American Immigration Council’s Immigration Justice Campaign, filed the complaint on Thursday with the DHS watchdog, the Office of the Inspector General, and with its Office for Civil Rights and Civil Liberties.

“The government has a long history demonstrating it’s not capable of holding people in their custody responsibility responsibly and certainly not children who require special protections and safe guards,” Ms Shepherd said. “They require a different environment, not one where guards are going to be physically abusing them.” – Guardian

1 Coronavirus: No swift return to ‘normal state of affairs’, warns expert
2 Growing hope in Government of partial easing of restrictions after May bank holiday
3 Coronavirus: Ireland will have to ‘live alongside the virus’
4 Chief medical officer urges people not to visit hardware stores
5 Government should question necessity of passenger flights – Immunology expert
Real news has value SUBSCRIBE