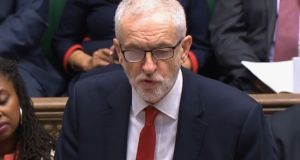 The EU will wait to see if the House of Commons backs Boris Johnson’s call for a December election on Monday before deciding how much of an extension to allow the UK.

Ambassadors of the EU 27 meeting in Brussels on Friday deferred to Monday evening or Tuesday a decision to grant a three-month extension. Tuesday is just two days before, in the absence of a deal or extension, the UK will crash out of the EU.

The move to defer a decision followed an insistence from France’s president Emmanuel Macron that any further extension to Brexit should be clearly justified. France says an agreement to an extension can not be taken for granted.

Mr Johnson has asked the EU for a delay in Brexit from October 31st until January 31st, as he was required to do under an Act of parliament. He has made it clear, however, that he does not want an extension of that duration and is now pressing MPs to back his plan for a general election on December 12th.

MPs would have several weeks to scrutinise his withdrawal deal with the EU in the meantime, he says.

The EU’s stance puts renewed pressure on the Labour Party to back a general election when the issue is voted on in the Commons on Monday. In a bizarre game with the EU of “You first, no you”, Labour has been deferring a decision until an EU decision on the length of the extension.

But Brussels is saying implicitly now that the decision allowing a long extension will depend on a guarantee that an election will be held, and that can only be assured if Labour backs Mr Johnson’s vote.

Labour leader Jeremy Corbyn was still keeping everyone guessing. He told ITV’s This Morning programme that he would support a parliamentary vote to hold an election if the prime minister came to parliament on Monday and made a commitment to take the threat of a no-deal Brexit off the table.

He said Mr Johnson’s position “includes the possibility of a no-deal exit” and the prime minister would have to remove that threat before he would support an election. It’s a high bar but one that, with goodwill – sorely missing – and creative language, Mr Johnson may yet surmount.

But Mr Corbyn may have difficulty in his own ranks. Many in the shadow cabinet and parliamentary party are opposed to holding an election while Brexit remains unresolved and the party is trailing behind the Conservatives in the polls.

Mr Johnson told Mr Corbyn to “man up” and support the vote. In a letter to the Labour leader, he said: “You have repeatedly said that once the EU accepts parliament’s request for a delay until January 31st, then you would immediately support an election. I assume this remains your position, and therefore you will support an election next week so the voters can replace this broken parliament.”

European Council president Donald Tusk, who has been taking soundings in capitals, had been seeking clarity on UK intentions from Mr Johnson before Monday’s extension decision, but ambassadors were taking the view that Mr Johnson’s expressed intentions were not a trusted guide to what would actually happen. Better to see how parliament voted on an election.

The French remain adamant both that an extension should be shorter than the three months suggested by the other member states and that it should be conditional on a game-changing event such as an election. Other states, including Denmark and the Netherlands, share the French view that a clear purpose must be advanced.

Amélie de Montchalin, France’s Europe minister, wrote on Twitter on Thursday: “What we want is clarity. The question is to know why we are giving extra time, because time alone is not a solution. Let’s wait to see if there will be elections before we get into fictional politics.”

Unanimity was not possible on Friday so the compromise agreed was to meet the French halfway. The discussion was described by several ambassadors as very useful.

The meeting agreed that a summit would not be necessary to take the decision on an extension – it will be done by “written procedure” – suggesting confidence in a meeting of minds between the French and the rest once the Commons has voted.

There is also a consensus to allow the UK to leave earlier that January 31st if and when it ratifies the withdrawal agreement. That could mean, if Mr Johnson’s schedule is kept, an election in December following Brexit. No better platform for a successful election campaign.