Christine Hallquist is the first openly transgender person to win a Democratic nomination for office in US history. Hallquist will take on Republican incumbent Governor Phil Scott in the November 6 general election. 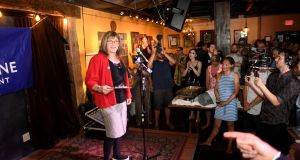 Democrat Christine Hallquist, the first transgender woman to be selected to run for governor of a US state, at her primary election night party in Burlington, Vermont. Photograph: Caleb Kenna/Reuters 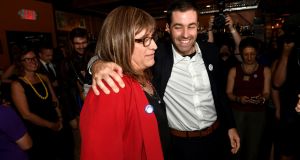 Democrats in Vermont have chosen the first transgender nominee for governor for a major US party, in primaries that also saw Minnesota Republicans reject a former two-term governor attacked as not supportive enough of Donald Trump.

Tim Pawlenty lost the Republican nomination for Minnesota governor on Tuesday after his opponent repeatedly attacked him for calling Mr Trump “unfit” for the White House in the aftermath of the Access Hollywood tape .

Vermont made history after Christine Hallquist became the first transgender American to be a major party nominee for governor. Ms Hallquist, a former CEO, won a four-way primary for clinch the Democratic nomination in the Green Mountain State. Due to a quirk in Vermont law one of her opponents was a 14-year-boy.

She will face incumbent Republican Phil Scott in November. Mr Scott, a moderate who faced a primary challenge on the right fuelled by his support for gun control, is considered the heavy favourite. According to one recent poll the incumbent Republican has a 61 per cent approval rating from Vermont Democrats.

Ms Hallquist follows in the footsteps of Danica Roem, the Virginia Democrat who in 2017 became the first transgender state legislator in the US.

Earlier this month she spoke to the Guardian about her chances, saying: “I tell people this isn’t the hardest thing I ever did. In fact, I think after transitioning everything else looks pretty easy.”

Her success caps a remarkable journey which has included decades of internal strife over how her family would accept her as Christine, the five-year transition process before she felt ready to present herself as a woman in her job as a high-powered CEO, and even dodging an exorcism attempt as a child.

Ms Hallquist (62) was keen to talk about her vision for Vermont – she wants to provide broadband access across the state, which she believes would aid rural economies, and she is a longtime advocate for environmental energy policies – but has dealt with enough interest at this point to know there would inevitably be questions about being transgender. She said that from a young age she felt she was a girl trapped in a boy’s body.

“When I was 11 years old – I’ll remember this day for ever, it’s like a snapshot – the day my mom dressed me as Little Red Riding Hood for Halloween. And it was beautiful. I loved it. And I said: ‘Mom, I want to be a girl.’ And she said: ‘Well, never tell anybody that.’

“That’s really all she said, but the way she said it I thought: ‘I’m never going to tell anybody that’.”

At that time it was still possible for people identifying as transgender to be placed in a mental institution, Ms Hallquist said, and she said she understood her mother’s attempts to protect her.

But though she hid her gender identification, Ms Hallquist was an effeminate child, which didn’t go down well in the Catholic school where she was taught, and says she was regularly beaten by nuns. Neither did the fact that she had been identified as “gifted” intellectually, Ms Hallquist said, and prone to question certain aspects of the Catholic faith.

“It got so bad that in eighth grade the monsignor called my parents and said we think David [Christine’s name before she transitioned] needs an exorcism,” Ms Hallquist said.

Her parents refused the monsignor’s suggestion and pulled Ms Hallquist, along with her siblings, out of the school. She went to a public school, later gaining a two-year associate degree, before rising through the business world to eventually become CEO of Vermont Electric Cooperative, an electricity company that serves about 34,000 people, mostly in northern Vermont.

Ms Hallquist said she would have been happy to carry on at the company, eventually easing into retirement, but she was inspired to run for governor by the election of US president Donald Trump.

“I went to bed, and of course like any other trauma I was in political depression and I just didn’t know what to do. I mean, many of us in this country shed a lot of tears for what happened on November 8th.”

In Minnesota, Mr Pawlenty, who was governor from 2003 to 2011 and mounted an unsuccessful president bid in 2012, had been considered the favourite in the primary and was one of the Republican Party’s best hopes for picking up a governor’s mansion in an unfavourable national environment. However, like a number of other establishment Republicans his past criticism of Mr Trump proved to be his Achilles heel.

As a consequence, Republican Jeff Johnson will face Congressman Tim Walz in November.

Ms Hallquist was not the only history-making candidate on Tuesday.

Ilhan Omar is poised to become one of the first Muslim women in Congress after winning the Democratic nomination in Minnesota’s Fifth Congressional District. Ms Omar will likely join Rashida Tlaib, who won a Democratic primary in Michigan last week on Capitol Hill in January. Both are expected to easily win their general elections in safe Democratic districts.

Congressman Keith Ellison easily won the Democratic nomination for state attorney general despite allegations of domestic abuse and a video recording the abuse. Mr Ellison has strongly denied the allegations and insisted “this video does not exist because I never behaved in this way, and any characterisation otherwise is false”.

Wisconsin Democrats nominated Tony Evers to be their standard bearer against Scott Walker, who is facing his fourth statewide election in eight years. Walker who has faced a recall in addition two hard fought campaigns for office, drew national attention through his efforts to break public sector unions in the state and support for right to work legislation.

In Connecticut, businessman Ned Lamont easily won the Democratic nomination for governor against Joe Ganim, the mayor of Bridgeport who mounted a political comeback after a 2003 conviction for fraud.

It’s the second time Mr Lamont has won a statewide Democratic primary. In 2006 he beat then-incumbent Joe Lieberman for the Democratic nomination for Senate as an anti-Iraq war candidate. However Mr Lieberman, who was Al Gore’s vice-presidential nominee in 2000, won the general election as an independent. – Guardian