Quick-talking and congenial, he is a regular fixture at gatherings in the Irish embassy 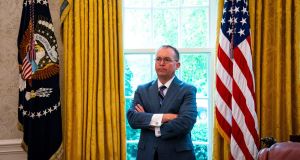 While the new appointment is being viewed by US media as something of a consolation prize for Mr Mulvaney (pictured), he is likely to approach his position as Northern Ireland envoy with enthusiasm. Photograph: Doug Mills/The New York Times

The news that US president Donald Trump could skip the annual speaker’s lunch this week on Capitol Hill may be an unexpected development heading into St Patrick’s week, but the appointment of a new US envoy to Northern Ireland has been welcomed by the government.

Mr Trump announced on twitter on Friday night that Mick Mulvaney is being replaced as White House chief of staff by South Carolina congressman Mark Meadows and will take up the position as Northern Ireland envoy.

While Mr Mulvaney’s appointment was not entirely unexpected, the timing was, according to sources in Washington and Dublin.

Rumours had been swirling about Mr Mulvaney’s future in recent months. He was appointed as Mr Trump’s third chief of staff in January 2019, replacing John Kelly, though he technically only held the role in an acting capacity. On Friday night, Mr Trump announced he was finally replacing Mulvaney with Mark Meadows, an arch-conservative congressman who was a vocal defender of the president during the impeachment trial. Mr Mulvaney reportedly learned of the decision on Friday while on vacation in Nevada.

While the new appointment is being viewed by US media as something of a consolation prize for Mr Mulvaney, he is likely to approach his position as Northern Ireland envoy with enthusiasm.

In recent months Mr Mulvaney has let it be known that he would be interested in the post which has effectively been dormant under the Trump presidency. He visited Northern Ireland in recent weeks where he met with First Minister Arlene Foster, Deputy First Minister Michelle O’Neill and the new permanent secretary at the Northern Ireland Office, Madeline Alessandri. A meeting with the new Northern Ireland secretary Brandon Lewis also followed in London, while he travelled to Dublin to meet with Leo Varadkar and US ambassador Ed Crawford at Farmleigh.

The 52 year-old has had a long-standing interest in Irish affairs. During his time in Congress – he was one of a wave of Tea Party members elected in 2011- he was an active member of the Friends of Ireland caucus. He took this interest with him when he moved to the White House, acting as an important link between the Irish government and the Trump administration, particularly during the planning of Mr Trump’s visit to County Clare last June.

Quick-talking and congenial, he is a regular fixture at gatherings in the Irish embassy, where he is known to sport a Guinness-themed tie on occasion. In January, for example, he attended a dinner at the residence of the Irish ambassador to welcome Phil Hogan on his first visit to Washington as EU trade commissioner. His grandparents hail from County Mayo, and he is a regular visitor to Ireland, particularly to Lahinch golf club where he is a member. One of his three children – he is the father of triplets – is currently attending university at Trinity College having spent some of her secondary school years in Dublin.

Mr Mulvaney also has a close relationship with the British embassy in Washington, frequently attending events at the ambassador’s residence. The British government was centrally involved in the organisation of his recent trip to Northern Ireland.

The Northern Ireland special envoy was created in the mid-1990s when Senator George Mitchell played a key role in the Good Friday Agreement. Later envoys included Richard Haass and Gary Hart. While there have been calls from senior members of Congress for some time to appoint a Northern Ireland envoy given the challenges of Brexit, there had been mixed messages from Dublin and London, reflecting a fear that a diplomatic appointee by Mr Trump could be less than helpful.