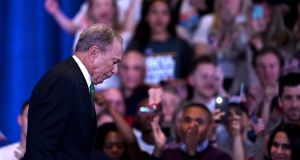 In the end, $500 million, state-of-the-art data analytics and a 2,400-strong campaign army was only enough to conquer American Samoa.

That was the cold electoral accounting confronting Michael Bloomberg and his top advisers when they gathered at his East 78th Street office in Manhattan early Wednesday morning to take stock of his presidential bid. The effort was supposed to have taken flight on “Super Tuesday” but instead crashed to earth in desultory fashion with a lone victory in the US protectorate in the South Pacific that is home to 55,000 souls. The decision to pull out of the race was not a complicated one, a person involved in the discussions said.

Shortly after 10am Bloomberg issued a statement that was characteristically rational. “I’m a believer in using data to inform decisions. After yesterday’s results, the delegate math has become virtually impossible – and a viable path to the nomination no longer exists,” he wrote, announcing he would end his campaign for the Democratic nomination and back former vice-president Joe Biden instead.

So ended a campaign the likes of which had not previously been seen in American politics – one that was propelled by technical wizardry, an entrepreneur’s audacity and a seemingly endless supply of money but was ultimately undone by circumstance and human frailty.

To pollster John Zogby, who once worked for Bloomberg, the defeat was a parable about the limits of money in politics. “If you want to be president, put your chequebook away and be prepared to humble yourself in bad weather and with a lot of pancakes,” he advised.

But that sentiment, and the harping on American Samoa, may obscure a larger truth: that Bloomberg was a contender. He entered the race only in late November and, after a barrage of advertising began shooting up the polls as Biden was stumbling.

By the end of January, several polls showed Bloomberg near the front of the Democratic field and gaining ground. “I just want to have Trump out of office, and I think Mike is one of the stronger candidates,” said Maryann Traxler (70), a Virginia doctor, explaining why she was volunteering for Bloomberg in the state.

Then came Las Vegas. On February 19th, Bloomberg took the stage in Nevada for his first Democratic debate and was promptly eviscerated by Massachusetts senator Elizabeth Warren. She attacked him relentlessly for his wealth, crass comments about women and the “stop-and-frisk” policing tactics that targeted young African-American and Hispanic men while he was mayor of New York.

“It’s certainly possible the strategy could have worked,” one Bloomberg ally mused. “Up until that first debate, he had extraordinary momentum.”

Said another: “If Mike Bloomberg had gotten in three months earlier, who knows?”

The reasons for Bloomberg’s historically bad debate performance are themselves a matter of debate – even for his close confidantes. Publicly, Howard Wolfson, Bloomberg’s top aide, took the blame for failing to adequately prepare his candidate.

Hank Sheinkopf, a veteran Democratic strategist, suggested that it was Bloomberg’s serious and cerebral nature that had let him down. “It was a trained engineer versus wild snarling dogs!” Sheinkopf said.

But behind the scenes, others struggled for answers. Some wondered if Bloomberg – a former equities trader and three-term mayor of New York City – was no longer accustomed to close combat after being feted in recent years as a business icon and global philanthropist. “You’re not getting really challenged,” one explained. Another speculated that Bloomberg may have expected deference.

For a 78-year-old Jewish billionaire and former Republican, winning the Democratic nomination for the presidency in a highly partisan and populist era was never going to be an easy proposition. Worse, Bloomberg, for all his accomplishments, is not a smooth retail politician.

He jumped into the race in late November after concluding that Biden, the standard bearer of the party’s moderate wing, was at risk of losing to Trump in battleground states. Voluminous polling commissioned by the famously data-obsessed candidate suggested there was a path – however narrow – to victory.

In fact, Bloomberg had been circling the contest far longer. In the 2018 midterm elections, he contributed more than $100 million to moderate Democratic candidates, helping the party to reclaim the House of Representatives. Those contributions prompted speculation that he was establishing a network within the party and building up a bank of favours he might later draw on.

Then, in March 2019, Bloomberg issued an anguished statement ruling out a run. His explanation was that his candidacy would further crowd the party’s centreground and so risk elevating its populist left wing.

“It’s essential that we nominate a Democrat who will be in the strongest position to defeat Donald Trump, ” Bloomberg wrote. “We cannot allow the primary process to drag the party to an extreme that would diminish our chances in the general election and translate into ‘Four More Years’.”

By the time he finally declared his candidacy, his competitors had spent months hunkered down in the early voting states of Iowa and New Hampshire following a traditional playbook: earn a strong showing to enthuse the party’s donors and springboard their campaigns toward the next races.

By necessity, Bloomberg tossed out that playbook. Instead, he bet all his chips on the 14 states and one territory (American Samoa) that went to the polls on Tuesday. Drawing on his $58 billion fortune he was able to guarantee six-figure salaries and housing allowances to staffers and quickly open some 200 campaign offices.

Andrew Yang, the former Democratic candidate, described the Bloomberg campaign’s Times Square headquarters as looking “like a spaceship”. Bloomberg, he observed, was not a Wall Street guy so much as “a tech and data guy”.

There was also the media operation. In little more than two months, the Bloomberg campaign splashed more than $300 million on slick television, radio and internet advertisements. “They put the money to good use,” one campaign strategist judged. “They did a good job of introducing this moderate, pragmatic technocrat to the rest of the country.”

In spite of the debate debacle, Bloomberg still managed to finish third in many contests on Tuesday – jumping ahead of Warren, in what some of his supporters consider a measure of justice. He might have done even better. With polls showing 17 per cent of Democratic voters still unsure of their choice on Tuesday, Bloomberg was in position to be a beneficiary had Biden not generated such a surge of momentum from his landslide victory in South Carolina on Saturday.

To Bloomberg advisers, the late break for Biden validated their view of the race all along: Democratic voters, they argued, had an existential fear of Trump’s re-election and so were seeking the best option to defeat him. “They aren’t looking for ideological perfection,” Stu Loeser, a Bloomberg spokesman, explained.

When Biden stumbled, those people gravitated to Bloomberg. When Biden re-emerged over the weekend, they returned.

If, as Bloomberg has insisted for months, his overriding goal is to defeat Trump, that outcome should be acceptable. In his concession, he offered generous praise for Biden. “I’ve known Joe for a very long time. I know his decency, his honesty, and his commitment to the issues that are so important to our country,” he said, promising to work for his election.

Still, the defeat hurt – even for a billionaire who is not known to dwell on setbacks or second-guess his decisions. One member of the Bloomberg inner circle repeatedly mentioned the need to “heal”.

Bloomberg’s opponents – particularly Warren – managed to reduce what is regarded by many as one of New York City’s better mayorships to “stop-and-frisk”. Overlooked was how Bloomberg guided the city after September 11th and then laid the foundation for a new era of growth.

Similarly, what was arguably Bloomberg’s greatest achievement – building from scratch a financial information service that has become the central nervous system of Wall Street – came to be tarnished by claims that he treated women employees poorly. Warren attacked the company’s practice of requiring women to sign non-disclosure agreements after the company settled their legal complaints.

“This is one of the extraordinary people of our lifetimes!” one long-time aide lamented. “Somehow that got lost.” – Copyright The Financial Times Limited 2020