President dismisses criticism of his handling of the coronavirus crisis 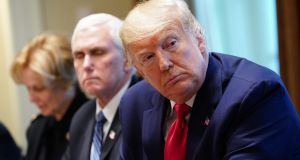 Donald Trump’s re-election campaign raised $86 million (€77.2 million) last month, the latest indication that the 45th president of the United States is amassing a huge fund ahead of November’s election.

The Republican National Committee (RNC), together with the president’s re-election committee, also reported its most successful month in terms of digital fundraising specifically, adding a million new donors.

“With this unprecedented support, the president and the RNC are assembling an unstoppable juggernaut focused like a laser on November,” Mr Trump’s campaign manager, Brad Parscale, said in a statement, attributing the increase in support to Mr Trump’s impeachment and his acquittal in the senate trial.

Mr Trump, who is almost certain to become the nominee when the Republican Party chooses its candidate at the Republican National Convention in Charlotte in August, is seeking a second term as president when Americans go to the polls on November 3rd.

On Monday, in an apparent reference to his new fundraising numbers, Mr Trump accused former New York mayor Michael Bloomberg, who hopes to secure the Democratic nomination, of running a “hapless campaign”. “The only people in favour of Mini Mike continuing with his hapless campaign are me and his political consultants, who are getting richer and richer by the day!” he wrote.

He has frequently weighed in on Twitter in recent days on the Democratic race, claiming that the party is trying to seize the nomination from Bernie Sanders.

Tweeting shortly after former vice-president Joe Biden’s victory in the South Carolina primary on Saturday, Mr Trump wrote: “Congratulations to Sleepy Joe Biden! ” But in a separate tweet he also claimed that Democrats were “working hard to destroy the name and reputation of Crazy Bernie Sanders, and take the nomination away from him!”

Mr Trump, who is to hold a campaign rally in Pennsylvania later this week, is believed to favour a Sanders nomination, believing the socialist senator would be an easier opponent in November.

The president has been battling criticism in recent days of his handling of the coronavirus outbreak, which claimed its sixth victim in the US on Monday, all in the Seattle area. Authorities in Washington state confirmed that a sixth person had died in the Seattle suburbs, and said the total number of cases in the state was 18. Cases of the virus have also been reported in New York city, Rhode Island and Texas.

But Mr Trump has taken a defiant tone in his public comments on the matter, dismissing accusations that his administration is unprepared and blaming mainstream news media and Democrats for exaggerating the crisis.

On Monday, stock markets regained some ground after their worst falls since the financial crisis of 2008 last week on the back of concerns about the economic impact of the virus.

Any further market falls will be a huge concern for Mr Trump eight months out from the presidential election, given that he is expected to tout a strong economy as one of his main achievements during the campaign.

Mr Trump revived his attacks on Twitter on Federal Reserve chairman Jay Powell, whom he has frequently urged to cut interest rates.

“As usual, Jay Powell and the Federal Reserve are slow to act. Germany and others are pumping money into their economies. Other Central Banks are much more aggressive. The US should have, for all of the right reasons, the lowest Rate. We don’t, putting us at a competitive disadvantage. We should be leading, not following!” he wrote.