President Donald Trump has said that he will continue to shake people's hands during the coronavirus outbreak, despite his germaphobia and advice from health officials, because "you can't be a politician and not shake hands." Video: Reuters 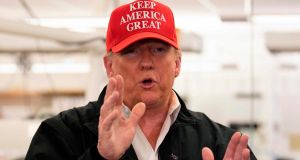 US president Donald Trump speaks during a tour of the Centers for Disease Control and Prevention (CDC) in Atlanta, Georgia. Photograph: Jim Watson/AFP/ Getty Images

US president Donald Trump is planning to boycott the annual St Patrick’s Day Speakers’ lunch in Washington next week the Irish Times has learned, amid ongoing tensions between the president and House Speaker Nancy Pelosi.

The president traditionally attends the lunch on Capitol Hill which is hosted by the House Speaker – one of the rare times in the year that the president visits congress.

But it is understood that Mr Trump and vice president Mike Pence have indicated they will not attend next Thursday, though the Oval Office meeting between the Taoiseach and the president will proceed as planned at the White House.

A decision not to attend the Speaker’s lunch would mark a break with tradition. The lunch is traditionally an opportunity for politicians from both political parties to put aside their political differences and celebrate Irish-American heritage. But the relationship between Mr Trump and Ms Pelosi is at a low point.

Mr Trump’s last interaction with the House Speaker occurred at the president’s annual State of the Union address to Congress in late February during his impeachment trial, when the president appeared to snub Ms Pelosi’s offer of a handshake, and Ms Pelosi tore up pages of his speech when he finished his address.

The development comes as Mr Trump named Mick Mulvaney as the new special envoy to Northern Ireland. In a tweet last night, Mr Trump announced that Mr Mulvaney, would be replaced by Republican congressman Mark Meadows as White House chief of staff. It is understood that Mr Mulvaney, who has a long-standing interest in Ireland and is a regular visitor to the country, was interested in the position for some time. He visited Northern Ireland late last month where he met with first minister Arlene Foster and deputy first minister Michelle O’Neill. He also travelled to Dublin where he met with Taoiseach Leo Varadkar, and held meetings with the new Northern Ireland Secretary, Brandon Lewis, in London.

A spokesman for the Irish embassy in Washington welcomed the news of the appointment. “This is a positive development demonstrating the United States’ long-standing commitment to the peace process. Mick Mulvaney has always had a great personal interest in Northern Ireland and we look forward to continuing to work with him on this and other issues.”

It is also understood that London is supportive of the appointment.

The first US special envoy to Northern Ireland, Senator George Mitchell was appointed in 1995 in the run-up to the Good Friday agreement, with Mr Mitchell playing a key role in brokering peace in the province. Successive appointees have included Richard Haass, Mitchell Reiss and Gary Hart, but the position has remained unfilled since the election of Donald Trump.

In a statement last night the White House confirmed that Mr Varadkar would meet with Mr Trump next week to celebrate St Patrick’s Day. “The President and the Taoiseach will discuss how to strengthen relations between the United States and Ireland, including the robust economic and cultural ties and joint commitment to maintain the gains of the Good Friday Agreement,” the statement said. “The President also looks forward to hosting the Taoiseach at the annual Shamrock Bowl presentation.”

Mr Varadkar is also scheduled to have breakfast with Mr Pence at his residence in Washington on Thursday morning and has a series of engagements in the US capital on Wednesday.

Separately, Sinn Féin leader Mary Lou Mc Donald announced she would not travel to Washington as planned next week, after the school attended by her children was shut due to the coronavirus.

Ms Foster and Ms O’Neill will travel to the US capital, however, for several events.