Maureen Dowd: Will Trump the blowhard blow us up?

Can two belligerent leaders living in fantasy worlds taunt us into a nuclear war? 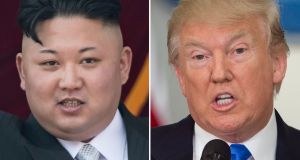 Watching Trump and Kim trade taunts is particularly disturbing because they mirror each other in so many unhinged ways. Photographs: Getty Images

A couple of chubby brats with big missiles and short fuses. Is nuclear winter coming? Fire and fury, the likes of which the world has never seen, are bellowing from a posh golf club in New Jersey, while fire and doom emanate from a medieval police state in Asia.

Ever since Donald Trump was elected, the mandarins and chatterers of the capital have been alarmed that we would get to this precipice of blustery, threatening exchanges between Trump and Kim Jong Un about thermonuclear annihilation, and that when we did it would be parlous.

Fear, Xanax and Ambien abound here. The rest of what Trump does may be loudmouth blather, but this is real. Now, in the advanced beginner stage of his presidency, he faces the most severe test since the Cuban missile crisis.

As Obama’s defence secretary Leon Panetta told Wolf Blitzer in an emotional interview on Friday night, this is not reality TV or a time for “loose talk”.

“What I’m sensing here is a situation that could get out of control” and lead to the loss of hundreds of thousands of lives in South Korea.

The jitters of world leaders and markets were not soothed by the fact sheet issued by Guam’s homeland security office after North Korea said it would launch a missile strike toward that US territor,y and Trump riposted that would mean “big, big trouble in North Korea”.

Two of the admonitions are “do not look at the flash or fireball, it can blind you” and “do not use conditioner in your hair because it will bind radioactive material to your hair”.

Administration officials have been trying to reassure journalists that James Mattis, John Kelly and Rex Tillerson have a pact designed to ensure that one of them is always in the country to watch over Trump in case he goes off the deep end.

It recalled the moment, recapped by Politico Magazine, when a Nixon defence secretary, James Schlesinger, got so worried about a cratering Nixon who was drinking and telling congressmen, “I can go in my office and pick up a telephone, and in 25 minutes, millions of people will be dead” that he told military commanders to check with him or Henry Kissinger if the president ordered up nukes.

In all my interviews of Trump over the years he never seemed very chesty about foreign intervention. “If only we could have Saddam back, as bad as he was, rather than $2 trillion spent, thousands of lives lost and all these wounded warriors,” he told me during the campaign.

His pitch was mostly about turning inward so America could shore up its economy, security and infrastructure.

“Unlike other candidates, war and aggression will not be my first instinct,” he said in his maiden foreign policy speech on the trail.

But the White House brings out a lot of gremlins in presidents as they deal with the wind shear of history. Now, in case North Korea is too far away, Trump is threatening “a possible military option” closer to home in Venezuela.

Watching Trump (71) and Kim (33) trade taunts is particularly disturbing because they mirror each other in so many unhinged ways. Trump is a democratically-elected strongman and Kim is a fratricidal despot, but they both live in bizarro fantasy worlds where lying and cheating is the norm.

They’re both spoiled scions who surpassed less ruthless older brothers to join their authoritarian fathers in the family business.

They both make strange fashion statements with their hair, and enjoy bullying and hyperbole.

They both love military parades, expect “dear leader” displays of fawning and favour McDonald’s and Madonna.

They both demand allegiance. When Trump feels he isn’t getting it or paranoia takes over, he publicly mocks his lieutenants or jettisons them.

Kim simply gets out his anti-aircraft machine guns and calls up his nerve-agent assassins. He had his uncle killed for, among the reasons, clapping halfheartedly, the New York Times reported.

Pyongyang goaded Trump on Friday with this nutty line: “We consider the US no more than a lump which we can beat to a jelly any time.”

“Kim understands Trump better than Trump understands himself,” Trump biographer Michael D’Antonio told me. “He is only comfortable dominating and forcing others into submission. When that’s not happening he experiences an almost physical discomfort because he feels unsafe. He doesn’t know any other way to achieve status.”

Proving there’s no method to his madness, Trump went after Mitch McConnell, who is literally the most important person to Trump in pushing his agenda through Congress and who, as Carl Hulse wrote in the Times, secured the president “the signature accomplishment of his young presidency” by getting Neil Gorsuch confirmed after blocking Barack Obama from filling that Supreme Court vacancy. That move will go down as one of the most devious things ever done in Congress.

Ted Sorensen wrote about how much Barbara Tuchman’s The Guns of August, chronicling leaders stumbling into the first World War, influenced JFK during the Cuban missile crisis.

In “the 1914 conversation between two German leaders on the origins and expansion of that war, a former chancellor asking ‘how did it all happen?’ and his successor saying, ‘ah, if only one knew’.

“If this planet,” said President Kennedy, “is ever ravaged by nuclear war, if the survivors of that devastation can then endure the fire, poison, chaos and catastrophe, I do not want one of these survivors to ask another, ‘how did it all happen?’ and to receive the incredible reply ‘ah, if only one knew’.”