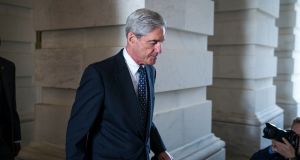 The special counsel investigating whether Russia interfered in the US presidential election and possible collusion between Moscow and the Trump campaign wants to speak with current and former senior White House officials.

The special counsel Robert Mueller is in talks with the West Wing about interviewing current and former senior administration officials, including the recently ousted White House chief of staff, Reince Priebus, according to three people briefed on the discussions.

Mr Mueller has asked the White House about specific meetings, who attended them and whether there are any notes, transcripts or documents about them, two of the people said.

Among the matters Mr Mueller wants to ask the officials about is US president Donald Trump’s decision in May to fire the FBI director, James Comey, the two people said.

That line of questioning will be important as Mr Mueller continues to investigate whether Trump obstructed justice in the dismissal of Comey.

No interviews have been scheduled, but in recent weeks Mr Mueller’s investigation has appeared to intensify.

Late last month, he took the aggressive step of executing a search warrant at the home of Paul Manafort, Trump’s former campaign chairman, in Alexandria, Virginia.

Legal experts say Mueller may be trying to put pressure on Manafort to cooperate with the investigation.

Although it has been clear for months that MrMueller would interview Trump’s closest advisers, his recent inquiries come as Trump is heading into the fall pushing his priorities in Congress, including a tax overhaul, with the constant distraction of a federal investigation.

Ty Cobb, a special counsel to the president, declined to comment, saying only that the White House would “continue to fully cooperate” with Mr Mueller’s inquiry.

He has frequently said that the White House will cooperate with Mr Mueller’s investigation and that he hopes it will be completed quickly.

Mr Mueller has expressed interest in speaking with other administration officials, including members of the communications team.

But Trump’s allies are particularly concerned about Mr Mueller’s interest in talking to Mr Priebus, a former chairman of the Republican National Committee who worked closely with Trump during the presidential campaign.

Trump’s confidants at the White House say Trump was never fully convinced that Mr Priebus would be loyal to him.

Shortly after the November election, Mr Priebus was made chief of staff, and he was involved in the major decisions the president made during the transition and in the first six months of the administration.

Mr Priebus made a point of being in most meetings and tried to be aware of what the president was doing. Trump fired him last month.

Priebus can potentially answer many questions Mr Mueller has about what occurred during the campaign and in the White House.