Peter Madsen arrested on Friday after escaping from his sinking submarine 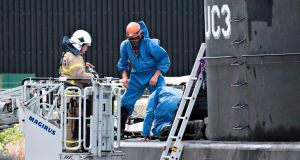 Danish police said there was no trace of a missing Swedish journalist inside an amateur-built submarine that sunk off the Nordic country’s eastern coast last week.

Police will now continue to search for Wall in the waters near the island in Copenhagen’s harbour where the sub’s owner Peter Madsen allegedly dropped her off late Thursday.

Madsen made a last-minute escape from the sinking sub and has denied any responsibility for the fate of Ms Wall. He was arrested on Friday on preliminary manslaughter charges.

Mr Moller Jensen said there are indications that the Danish inventor deliberately sank his submarine.