However, Beijing will back North if US opens hostilities, according to newspaper editorial 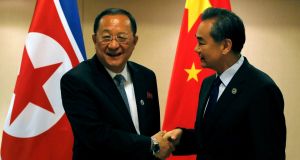 China will back North Korea if the US strikes first against its neighbour and ideological ally, but if Pyongyang initiates hostilities and prompts a US response, China will stay neutral, the state-run Global Times newspaper said in a commentary.

The Global Times, which is published by the Communist Party’s official organ People’s Daily, said in an editorial that China – North Korea’s biggest trading partner and most significant ally – needed to protect its interests.

“China should also make clear that if North Korea launches missiles that threaten US soil first and the US retaliates, China will stay neutral. If the US and South Korea carry out strikes and try to overthrow the North Korean regime and change the political pattern of the Korean peninsula, China will prevent them from doing so,” reads the editorial in the paper’s English-language edition.

The Global Times is hugely influential, although it is not an organ of state and its views are not official dogma. However, in a tightly controlled news environment, the newspaper’s views generally chime with those of the government.

After threatening this week to unleash “fire and fury” on North Korea if it tries to attack the US, president Donald Trump has again cranked up his bellicose rhetoric saying “there are no mixed messages” and suggesting that perhaps his earlier warning “wasn’t tough enough.”

For its part, North Korea’s KCNA official news agency reported that its military plans to fire four intermediate-range missiles to land 30km-40km from the US Pacific territory of Guam and it would finalise the plan by mid-August.

China is positing itself as an “honest broker” in the Korean crisis, seeking talks along the lines of the long-stalled six-party talks it previously hosted in Beijing, including both Koreas, Russia, Japan and the US.

Beijing does not want regime change in North Korea as reunification could mean US influence extending to its borders and it wants to maintain the North as a buffer state. It also fears economic collapse could lead to millions of refugees trying to get into China.

“Beijing is not able to persuade Washington or Pyongyang to back down at this time. It needs to make clear its stance to all sides and make them understand that when their actions jeopardise China’s interests, China will respond with a firm hand,” the editorial said.

While Beijing has made its displeasure at Pyongyang’s nuclear tests and missile launches, it has also complained about joint military exercises carried out by the US and South Korea as they escalate tensions.

“It is hoped that both Washington and Pyongyang can exercise restraint. The Korean peninsula is where the strategic interests of all sides converge, and no side should try to be the absolute dominator of the region,” the Global Times said.

Some 30,000 US troops are due to start annual joint military drills with South Korea later this month called the Ulchi Freedom Guardian. The manoeuvres deeply anger North Koreans, who see them as a precursor to invasion.

This week, US and Japanese troops began an 18-day live-fire exercise on the northern Japanese island of Hokkaido.