Charlottesville: FBI to investigate car being driven into crowd

A car drives into a group of counter-protesters approximately two hours after violent clashes at a white nationalist rally in Charlottesville, Virginia. Video: Brennan Gilmore 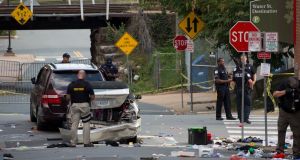 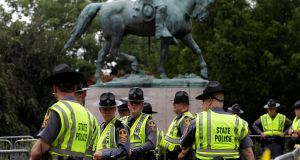 Virginia state troopers stand under a statue of Robert E Lee before a white supremacist rally in Charlottesville, Virginia, US. Photograph: Joshua Roberts/Reuters 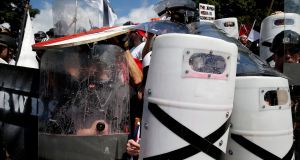 White supremacists shelter behind their shields after clashing with counter protesters at a rally in Charlottesville, Virginia. Photograph: Joshua Roberts/Reuters 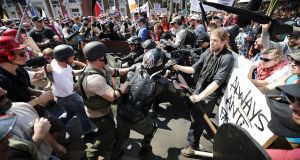 White nationalists, neo-Nazis and members of the “alt-right” clash with counter-protesters as they enter Lee Park during the “Unite the Right” rally in Charlottesville, Virginia. Photograph: Chip Somodevilla/Getty Images 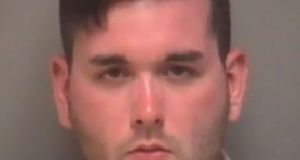 US authorities are investigating the outbreak of violence in Charlottesville, Virginia, on Saturday, following clashes at a white nationalist rally in the city that left one person dead and injured more than 30.

The violence was widely condemned, with many politicians and activists on both the left and right also criticising US president Donald Trump, a Republican, for waiting too long to address it and for failing to explicitly condemn the white-supremacist marchers who ignited the melee.

Virginia police have not yet provided a motive for a driver who plowed a car into a crowd of people protesting against the white nationalists, but US attorneys and the FBI have opened a civil rights investigation into the incident, an FBI field office said.

Four people have been arrested, including James Fields, a 20-year-old white man from Ohio who has been charged with murder over the car incident.

Col Martin Kumer, the superintendent of Albemarle- Charlottesville Regional Jail, told The Guardian: “[Mr Fields] has been charged with second-degree murder, three counts of malicious wounding and failing to stop at an accident that resulted in a death.”

The vehicle killed a 32-year-old woman and injured 19 people, five of them critically.

Federal authorities were also looking into a helicopter crash on Saturday that killed two Virginia state policemen aiding efforts to quell the clashes between white nationalists and counter-protesters.

On Sunday morning, Ivanka Trump, the president’s daughter and a White House adviser, appealed on Twitter for Americans to “be one country UNITED. #Charlottesville.”

She also posted: “There should be no place in society for racism, white supremacy and neo-Nazis.”

An organiser of Saturday’s Unite the Right rally, which was staged to protest the planned removal of Confederate war hero Robert E Lee’s statue from a park, said supporters of the event would not back down.

“Absolutely we are going to have further demonstrations in Charlottesville, because our constitutional rights are being denied,” said Jason Kessler, whom civil rights groups identified as a white nationalist blogger. He did not specify when.

Virginia governor Terry McAuliffe, a Democrat, had declared an emergency in the city on Saturday and halted the rally, but that did not stop the violence.

The rally stemmed from a long debate in the US South over the Confederate flag and other symbols of the rebel side in the civil war, which was fought over slavery.

Trump had said on Saturday that there was more than one side to the Charlottesville incidents.

“We condemn, in the strongest possible terms, this egregious display of hatred, bigotry and violence on many sides,” he told reporters at his New Jersey golf course.

1:2 There should be no place in society for racism, white supremacy and neo-nazis.

2:2 We must all come together as Americans -- and be one country UNITED. #Charlottesville

He then repeated the phrase “on many sides” for emphasis.

He did not specifically mention or fault the role of white nationalists.

Trump added that this issue had been “going on for a long time in our country. Not Donald Trump, not Barack Obama. A long, long time.”

“I think declaring racial bigotry unacceptable is a very smart and calming thing for the president to do,” Mr Bossert said on CNN. “It’s not meant not to condemn hate.”

A White House spokesperson also said that Trump was condemning all forms of “violence, bigotry and hatred” when he spoke about the violence in Charlottesville, including “white supremacists, KKK, neo-Nazi and all extremist groups.

“He called for national unity and bringing all Americans together.”

Following his response on Saturday, Trump faced bipartisan criticism for failing to explicitly condemn the role of white supremacists, who had marched through the streets carrying flaming torches, screaming racial epithets and setting upon their opponents.

The Florida Republican senator Marco Rubio was among those calling for a straightforward condemnation.

Republican senator Cory Gardner of Colorado tweeted: “Mr President – we must call evil by its name. These were white supremacists and this was domestic terrorism.”

Mr Gardner also said on CNN’s State of the Union programme on Sunday: “Calling out people for their acts of evil - let’s do it today - white nationalist, white supremacist.

“We will not stand for their hate.”

This was echoed by senator Orrin Hatch of Utah, who lost a brother in the second World War. “We should call evil by its name. My brother didn’t give his life fighting Hitler for Nazi ideas to go unchallenged here at home,” said Hatch on Twitter.

These calls for specific condemnation were echoed by a number of Democrats. The Senate minority leader, Chuck Schumer, said in a statement: “The march and rally in Charlottesville goes against everything the American flag stands for. President Trump must condemn this in the strongest terms immediately.”

Bernie Sanders, an independent from Vermont who caucuses with the Democrats, tweeted at Trump: “No, Mr President. This is a provocative effort by neo-Nazis to foment racism and hatred and create violence. Call it out for what it is.”

The Republican House speaker, Paul Ryan, tweeted: “The views fueling the spectacle in Charlottesville are repugnant. Let it only serve to unite Americans against this kind of vile bigotry.”

The Senate majority leader, Mitch McConnell, tweeted: “The hate and bigotry witnessed in #Charlottesville does not reflect American values. I wholeheartedly oppose their actions.”

“‘White supremacy’ crap is worst kind of racism – it’s EVIL and perversion of God’s truth to ever think our Creator values some above others.”

The initial White House response on Saturday came from the Twitter account of the first lady, Melania Trump, not the president: “Our country encourages freedom of speech, but let’s communicate w/o hate in our hearts. No good comes from violence. #Charlottesville.”

The president did not issue a statement until 40 minutes later, when he said on Twitter: “We ALL must be united & condemn all that hate stands for. There is no place for this kind of violence in America. Lets come together as one!”

David Duke, the former head of the Ku Klux Klan who was the subject of controversy during the 2016 election campaign when Trump did not immediately condemn his endorsement, pushed back on this initial tweet.

“I would recommend you take a good look in the mirror & remember it was White Americans who put you in the presidency, not radical leftists,” said Duke, who was in Charlottesville.

Trump did not specifically mention Charlottesville until a following statement on Twitter, in which he described the clashes as “Sad!”

Trump tweeted: “Am in Bedminster for meetings & press conference on VA & all that we have done, and are doing, to make it better - but Charlottesville sad!”

The president, in his responses, bemoaned that the clashes were happening when “our country is doing so well in so many ways,” citing low unemployment and the renegotiation of trade deals.

He noted: “We have so many incredible things happening in our country, so when I watch Charlottesville, to me it’s very, very sad.”