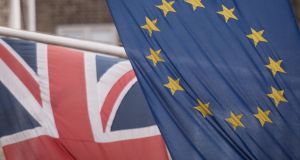 British ministers are to publish a new series of detailed papers setting out their aims for the Brexit talks. File photograph: Stefan Rousseau/PA Wire

British ministers are to publish a new series of detailed papers setting out their aims for the Brexit talks amid criticism about a lack of clarity on the government’s negotiating position.

The first set of position papers, to be published from this week, will include one covering the Border between Northern Ireland and the Republic after the UK has left the EU.

A second batch of papers, to be released in the run-up to the October meeting of the European Council in Brussels, will look at “future partnership” arrangements between the UK and the EU, including the UK’s proposals for a new customs arrangement with the bloc.

Officials said the papers would show the British government was ready to “broaden out” the negotiations and move forward towards a deal that worked for both sides.

The disclosure comes as Britain’s Brexit secretary David Davis prepares to embark on a third round of talks with the EU’s chief negotiator, Michel Barnier, in the Belgian capital at the end of August.

Mr Barnier is reported to have warned EU ambassadors that the first two rounds had failed to produce sufficient clarity on the opening issues of the Irish Border, the rights of EU citizens in the UK, and the UK’s “divorce bill”.

His gloomy assessment cast doubt on whether the talks will have made enough progress to begin discussions in the autumn on a new free-trade deal between the UK and the EU.

Taoiseach Leo Varadkar has recently expressed his frustration at the failure so far of the British government to come up with firm proposals to ensure that there is no return to the “hard” Border between the North and the Republic.

On his first official visit to Northern Ireland earlier this month, the Taoiseach even put forward his own suggestions for a “soft Brexit” — including the possibility of creating a new EU-UK customs union.

Sources at Britain’s department for exiting the EU said the “future partnership” papers would show that the British government was ready to move on to the next stage of the negotiations.

They insisted the issues in the opening stage of the talks — including the divorce bill the UK will have to pay in respect of its outstanding liabilities — remained “inextricably linked” with negotiations on its future relations with the bloc.

“The approaches outlined in these papers have been carefully formulated following months of work and consultation,” one source said.

“We’ve been crystal clear that issues around our withdrawal and our future partnership are inextricably linked, and the negotiations so far have reinforced that view.

“These papers show we are ready to broaden out the negotiations. Businesses and citizens in the UK and EU want to see the talks progress, and move towards discussing a deal that works for both sides.”

As well the issue of the Irish Border, the first set of position papers will also cover continued availability of goods for the EU and the UK, and confidentiality and access to official documents following the UK’s withdrawal.