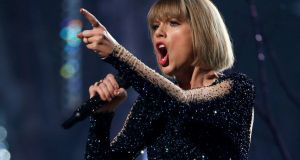 Taylor Swift: ‘I felt him grab onto my ass cheek under my skirt.’ File photgraph: Mario Anzuoni

Pop singer Taylor Swift on Friday won an important ruling in the trial stemming from her allegation that she was groped by a Colorado disc jockey, with the judge dismissing the DJ’s rival claim accusing the singer of wrongfully getting him fired.

The ruling by US District Judge William Martinez left intact Ms Swift’s assault and battery countersuit against David Mueller, who asserts he was falsely accused by the recording star and ousted from his $150,000-a-year job at radio station KYGO-FM under pressure from her.

The Grammy-winning artist known for such hits as Fearless and I Knew Your Were Trouble reacted to the decision with tears of joy, embracing members of her legal team and family members with bear hugs in the courtroom.

Mr Mueller sat alone at the plaintiff’s table, appearing somber as he sipped a glass of water.

Friday’s decision capped the fifth day of a trial highlighted by vivid testimony from Ms Swift charging that Mr Mueller clutched her bare buttocks during a pre-concert fan reception in 2013 against Mueller’s assertion under oath that he did no such thing.

The judge had tossed out Mr Mueller’s defamation-of-character claim against Ms Swift before the trial, ruling that the former Denver DJ had waited too long to file suit under the statute of limitations.

Earlier on Friday, Ms Swift’s former bodyguard corroborated her account of being groped by Mr Mueller, testifying that he saw the radio personality slip his hand under the singer’s skirt as they posed together for a photo with Mr Mueller’s then-girlfriend.

Lawyers for both sides rested their respective cases after the ex-girlfriend, Shannon Melcher, took the stand as the final witness to deny seeing Mr Mueller inappropriately touch Swift during the picture-taking session. But she added, “I don’t have eyes in the back of my head.”

After jurors were excused for the day, Ms Swift’s lawyer, J Douglas Baldridge, asked the judge to throw out Mr Mueller’s two remaining legal claims in the trial - disruption of his $150,000-a-year employment contract and interference with his future earnings.

Ms Swift has said her representatives lodged a complaint with KYGO management about the alleged groping but insisted she never demanded Mr Mueller be fired.

Although Judge Martinez agreed to dismiss both claims as they related to Swift, he kept the contract claim intact for Ms Swift’s two co-defendants - her mother, Andrea, and her radio station liaison Frank Bell.

The eight-member jury also will be left to decide whether Mr Mueller is liable for assault and battery, for which Ms Swift is seeking a symbolic $1 in damages.

Ms Swift, known for baring her soul and her grudges in her music, by all accounts was the undisputed star witness of her own trial, giving an unflinching account of the incident in question on Thursday.

‘Your client grabbed my ass’

In unvarnished language that occasionally drew titters in the courtroom, even from some jurors, Ms Swift testified that she was the victim of a “devious and sneaky act.”

“Your client grabbed my ass,” she told Mr Mueller’s lawyer, Gabriel McFarland. “He stayed latched onto my bare ass cheek. I felt him grab onto my ass cheek under my skirt.”

Greg Dent, Ms Swift’s bodyguard and a former police officer who said he has provided security for many other celebrities, bolstered her narrative when he took the stand on Friday.

“I saw his hand under her skirt. ... Her skirt went up. ... She jumped,” Mr Dent testified, adding that Ms Swift then moved closer to Mr Mueller’s girlfriend, who was standing on Ms Swift’s other side.

“I was definitely sure that he had been drinking,” Mr Dent said of Mr Mueller. “I don’t know what level. He wasn’t staggering or falling down.”

The photo, repeatedly displayed in court, shows Ms Swift flanked by Mr Mueller and Ms Melcher, all three smiling for the camera. Mr Mueller has his right hand concealed behind Swift’s backside, and she appears to have shifted her hip away from him.

Mr Dent said he did not immediately intervene because he took his cues from Ms Swift, who continued with the meet-and-greet session. When she finished meeting her fans, Mr Dent said, Ms Swift told her staff about the groping.

Following Mr Dent to the stand was Mr Mueller’s longtime friend and former co-host at KYGO-FM, Ryan Kliesch. He repeatedly answered “no” when asked by Judge McFarland if he had ever seen Mr Mueller disrespect, demean, condescend or act inappropriately toward women.

The jury was due to return on Monday for closing arguments in the case.