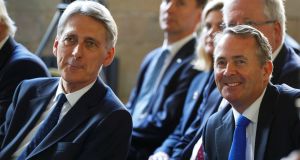 UK Chancellor Philip Hammond and International Trade Secretary Liam Fox have come together to declare that a post-Brexit transition would not be a “back door” to Britain remaining in the EU.

After a summer of cabinet feuding, Mr Hammond, who favours a “softer” pro-business Brexit, and Dr Fox, a hardline Brexiteer, said that they agreed there should not be a “cliff-edge” break when Britain leaves the EU in March 2019.

In a joint article for The Sunday Telegraph, they agreed that any transition would be “time limited” and that Brexit would mean the UK pulling out of both the EU single market and the customs union.

“We want our economy to remain strong and vibrant through this period of change. That means businesses need to have confidence that there will not be a cliff-edge when we leave the EU in just over 20 months’ time,” they wrote.

“That is why we believe a time-limited interim period will be important to further our national interest and give business greater certainty — but it cannot be indefinite; it cannot be a back door to staying in the EU.

“We are both clear that during this period the UK will be outside the customs union and will be a ‘third country’, not a party to EU treaties.”

UK Prime Minister Theresa May will hope the intervention of the two ministers will cool temperatures in the Tory ranks amid divisions over Brexit and speculation of a possible leadership challenge when MPs return to Westminster in September.

From this week, the UK Government is to start publishing a new series of detailed papers setting out its negotiating position on a range of key issues, amid criticism from Brussels of a lack of clarity about what it wants from the talks.

They will start with one covering the thorny issues of the Border between Northern Ireland and the Republic to be followed in the autumn by a second series looking at the future relationship with the EU, including post-Brexit customs arrangements.

Ministers hope it will be enough to persuade the EU’s chief negotiator Michel Barnier that sufficient progress has been made on the opening issues of the Irish border, the rights of EU citizens in the UK, and Britain’s “divorce bill” to move on to the second phase of talks including a new trade deal.

Meanwhile the leading Conservative Remainer Anna Soubry warned the prime minister that she needed to face down the “hard Brexiteers” in the Conservative ranks if she wanted to hold on to her position in No 10.

In an article for The Mail on Sunday, the former business minister indicated she could be prepared to join with politicians from other parties to stop the country “staggering recklessly” towards a hard break with Brussels.

“Could I ever see myself joining with like-minded people who want to save our country from such an appalling fate? And has that moment arrived yet?” she wrote.

“The answer to the first question is ‘it is not impossible’; the answer to the second is ‘no’. But I would be betraying my principles if I did not make it clear that country must always come before party.”

Her comments came as Labour former foreign secretary David Miliband issued a call for politicians on all sides to fight back against the “worst consequences” of last year’s vote for Britain to leave the EU.

Mr Miliband, who narrowly lost out to his brother Ed in the 2010 Labour leadership contest and who now heads the International Rescue Committee relief agency in New York, described the outcome of the 2016 referendum as an “unparalleled act of economic self-harm”.

Writing in The Observer, he said the country should have the chance to vote on any Brexit deal in a second referendum with a straight choice between remaining in the EU and the negotiated alternative.

“In Britain, the implementation of the EU referendum decision has been rash and chaotic. The timing and content has been governed by factions in the Tory party. Our negotiating position is a mystery — even on immigration,” he wrote.

“So the fightback against the worst consequences of the referendum has the opportunity and responsibility to get its bearings fast.”