November 7th, 2018: In a close Texas Senate race, Democrat Beto O'Rourke has failed to unseat incumbent Republican Ted Cruz. However his strong performance has given hope to Democrats, who have taken control of the House of Representatives. Video: Reuters 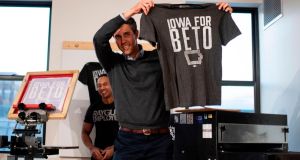 The heavens part. The light shines down. The rise in the oceans begins to slow. The world is once more bathed in the mystical glow of a messiah. Our redemption from Donald Trump is at hand.

We have The One again, a New One – another lanky, bookish, handsome man with an attractive young family, a thin résumé, an exotic name, a hip affect, a rock star aura, an enticing smile, a liberal press corps ready to fluff his pillows and a frothing Fox News.

Let Elizabeth Warren knock herself out with policy proposals. Let Kamala Harris be the adult in the room. Let Bernie Sanders bellow away.

The magical man-boy, Beto O’Rourke, has come back from his 40 days in the desert – vlogging, contemplating, floating in and out of a funk – to share his gifts.

He has given us the blessed news: “Man, I’m just born to be in it.” He told Vanity Fair that his words at a Texas campaign stop when he was trying to unseat Ted Cruz were pulled out of him “by some greater force”, musing: “Everything that I said, I was, like, watching myself, being like, How am I saying this stuff? Where is this coming from.”

Annie Leibovitz advised Beto to wear a blue button-down shirt for her Vanity Fair cover shoot if he was going to run. And now we can hear, as Hillary Clinton noted sardonically about Barack Obama in 2008, “celestial choirs”.

Beto floats above the fray, staying vague on nettlesome issues. The 46 year old offers the politics of feelings.

“I don’t have a team counting delegates,” he told Vanity Fair, adding, “It’s probably not the most professional thing you’ve ever heard about this, but I just feel it.”

Afterall, during his 2008 campaign, Obama merely went back to Chicago to see Malia perform in The Odyssey. Beto loved the epic so much, he thought about naming his son Odysseus, settling instead for Ulysses.

Wandering alone, as Jesus, Barack and Beto did, is part of the hero’s journey defined by Joseph Campbell. Beto loves Joseph Campbell and Star Wars, which was inspired by Campbell’s work.

The last One, about the same age when he jumped into national politics precociously aiming to usurp his elders, was also a uniter who went on an odyssey of self-discovery in New York while at Columbia.

The last One also sold a cult of personality, offered himself as a symbol of modernity, sparked Oprah’s interest and had a preoccupation with being cool.

Indeed, Obama told David Axelrod recently on The Axe Files that Beto reminded him of himself.

The One anointing the New One. Joe Biden, pushed aside by Obama in the last election, was understandably irritated.

Just as reporters once swooned when Obama made like Jay-Z and brushed imaginary dirt off his shoulder after a tough primary debate in Philly in 2008, reporters were entranced when O’Rourke air-drummed Baba O’Riley by The Who at a Whataburger drive-through after his debate with Cruz.

To many, Beto’s appeal is his persona as a quasi-rebellious 1990s suburban teenager, a skateboarding punk rocker who seems to have modelled his campaign logo on the spicy ketchup logo at Whataburger.

To many, Beto’s appeal is his persona as a quasi-rebellious 1990s suburban teenager, a skateboarding punk rocker

But others are less charmed. A satirical video on Twitter by skaters mocked “bad-skater Beto” as the kind of middle-school poser who “went to Zumiez and spent $27 on stickers”.

In a new Reuters story, Joseph Menn reveals that while O’Rourke was still a teenager, he was a member of the Cult of the Dead Cow, a stealthy hacking group named after an old Texas slaughterhouse. A kind of Neo-lite, he used the handle “Psychedelic Warlord” looking for free video games. (Socialist alert!)

A hacker might be refreshing after a president who refers to Tim Cook as Tim Apple. Still, Menn writes, “it’s unclear whether the United States is ready for a presidential contender who, as a teenager, stole long-distance phone service for his dial-up modem, wrote a murder fantasy in which the narrator drives over children on the street, and mused about a society without money”.

The 15th entry in the Democratic race is at the nexus of many tricky issues for a party desperate to oust Individual 1 from the White House.

Is it better to nominate a celebrity like Obama with a slight record that cannot be targeted or someone with established credentials? Should the nominee spring from the far left, the vector brimming with electricity and fight, or is that suicidal in a national election?

Can white men jump in, or is this post-#MeToo era the time when Democratic and independent women will demand a woman at the top of the ticket? Will Democratic voters longing for another Obama and the minority voters who strayed from Hillary want an African-American?

Can pugilistic progressives stomach a rich kid like Beto at a time when the country is in an eat-the-rich mood? Will they tolerate candidates like Beto and Biden, who speak well of Republicans and have a history of working with them?

As the Wall Street Journal reports, O’Rourke tried to please Texas Republican business leaders when he “opposed Obamacare, voted against Nancy Pelosi as the House Democratic leader and called for a raise in the social security eligibility age”.

The fever is running high in his party. Will Beto turn out to be born for it or borne away by it?