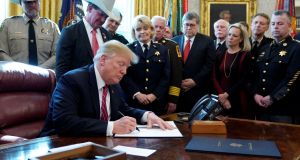 Donald Trump signs a veto of the measure to end his emergency declaration to get funds for a border wall, with sheriffs and attorney general William Barr (centre) and department of homeland security secretary Kirstjen Nielsen (right of Barr) in the White House. Photograph: Jonathan Ernst/Reuters

US president Donald Trump has issued the first veto of his administration, blocking a measure that opposed his use of a national emergency to circumvent Congress in an effort to secure funds to build a wall on the US-Mexico border.

Signing the veto on Friday, Mr Trump said the national emergency would provide “safety at the border”.

William Barr, the recently appointed attorney general, said it was “clearly authorised under the law”.

Earlier this week 12 Republicans joined with Democrats in the Senate to rebuke the president over his push to bypass Congress for a plan that many argue is a vanity project.

The veto marks the latest attempt by the US president to advance construction of the border wall – a signature part of his 2016 election campaign that he has failed thus far to achieve.

Mr Trump wants to secure a political win with the wall for the 2020 presidential race, but Democrats do not want to give him a victory.

I’d like to thank all of the Great Republican Senators who bravely voted for Strong Border Security and the WALL. This will help stop Crime, Human Trafficking, and Drugs entering our Country. Watch, when you get back to your State, they will LOVE you more than ever before!

The battle between the White House and Congress illustrates how Republicans are growing a little more willing to challenge the president.

While some oppose the wall, many of the Republicans who voted to disapprove the national emergency did so because they believed it usurped power from Congress.

Some GOP members also warned that it would set a precedent that a future Democratic president could use to overcome Republican opposition to more liberal policies.

Ahead of issuing the veto, Mr Trump thanked the Republican senators who did not support the congressional measure opposing the national emergency: “This will help stop Crime, Human Trafficking, and Drugs entering our Country. Watch, when you get back to your State, they will LOVE you more than ever before!”

Congress needs a two-thirds majority in both houses to override the presidential veto – a hurdle that looks unlikely to clear in the Senate.

Moving to the courts

In a separate battle, several states across the US have sued the Trump administration over the national emergency, setting the stage for the courts to determine whether it is legal.

The American Civil Liberties Union (ACLU), which has filed a lawsuit opposing the national emergency, criticised the veto, but said the move was irrelevant because the issue would be ultimately be decided by the courts.

“Even members of President Trump’s own party are beginning to realise that he is a one-man constitutional crisis,” said Anthony Romero, executive director of ACLU. “Congress has rejected the president’s declaration, and now the courts will be the ultimate arbiter of its legality. We look forward to seeing him in court and to the shellacking that he will receive at the hands of an independent judiciary.”

Mr Trump has also signalled that he intends to fight even harder for border-wall funding later this year. Earlier this week he unveiled a budget for fiscal 2020 that requests $8.6 billion (€7.6 billion) for the wall. While Democrats – and some Republicans – described the budget as “dead on arrival”, the move signalled that Mr Trump intends to make the wall a core issue in his re-election campaign.

At political rallies ahead of the midterm elections in November last year, Mr Trump urged supporters to chant “Finish that Wall” in an effort to convince his base that he had succeeded in building more wall on the border than his administration has actually done.

From Kamala Harris, a senator from California, to former congressman Beto O’Rourke, several of the many Democratic presidential contenders are using the issue to criticise Mr Trump over his stance on immigration. – Copyright The Financial Times Limited 2019