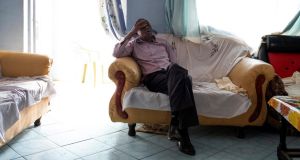 John Quindos, who lost his wife, his daughter and her three children in the Ethiopian Airlines aircraft crash. Photograph: Tyler Hicks/New York Times

John Quindos wailed and hyperventilated so violently that officials rushed him to a first-aid station. Then, as the magnitude sunk in, he lost his voice.

He had been standing at Nairobi airport waiting for the arrival of his wife, his daughter and her three children. He was particularly excited to greet his granddaughter, Ruby, born nine months earlier in Canada. He had never seen her before. He never got the chance.

The aircraft his family was aboard – a Boeing 737 Max 8 operated by Ethiopian Airlines – smashed into a field last Sunday, killing all 159 people aboard.

“My heart is on fire,” he said quietly at his modest farmhouse in the Kenyan highlands, receiving a stream of mourners with almost preternatural grace.

As a clamorous global alarm over air safety rings in the wake of the crash, causing Boeing 737 Max aircraft to be grounded across the world, a quieter reckoning is taking place in shattered homes across Kenya, the country that suffered the single largest toll.

The 32 Kenyans who died – executives, cancer specialists, the head of the national football association, senior aid workers and educators, among others – offered a vivid snapshot of the nation’s internal growth and ambitious integration into the regional and global economies in recent years.

For decades, Nairobi has been the hub of East Africa, trading on its reputation as an oasis of calm in a region often rocked by famine, conflict, even genocide. A base for numerous United Nations bodies, its open economy and tolerant ethos have attracted all comers.

More recently, multinational corporations have flocked to Kenya, strengthening an economy that has grown sixfold in the past 20 years. Over the same period, its population has grown to 50 million from about 30 million. Victims such as Quindos’s daughter, Caroline (34) illustrate part of the phenomenon – the success of a generation of Kenyans who emigrated to wealthier nations, turning the education provided by their impoverished parents into jobs abroad, money sent back home and foreign passports.

Paying school fees to nurture such opportunity is an obsession across Kenyan society, said Murithi Mutiga, an analyst with the International Crisis Group in Nairobi. “This is not a resource-rich country, so it sees its strength in its people,” he said. “In rural areas, people invest everything they have in their children’s education. It’s all that matters to them.”

Engoshura, where Quindos and his family lived, is a simple rural hamlet, only 145km from Nairobi, but a world away from its high-rises, traffic jams and shopping malls.

A quarry provides some jobs, but the backbone is subsistence farming. The land, a giant farm in the colonial era, has been divided into a patchwork of small plots. “Maize, beans, bananas. One cow. Maybe some sheep,” said Paul Karanja, a neighbour. One day this week thousands of residents flocked to the funeral of a 95-year-old veteran of the Mau Mau, the insurgents who fought colonial settlers in Kenya during the 1950s.

Pillars of the community

Quindos and his wife, Ann Wangui, were both teachers and pillars of the community. Wangui (60) led church committees and raised money for a water tank. Quindos was a candidate in parliamentary elections in 2013 but came in third, failing to win a seat.

They sent their children to the best schools they could afford. Foreign travel followed. One son, Kelvin Karanja, studied medicine in Venezuela. Their daughter Caroline became an accountant, married a banker, and six years ago moved to the Caribbean island of Bermuda.

“Most of us just went to local universities, and that was it,” Karanja said. “They were the trailblazers.” Their success brought dividends for their parents back in Kenya. Remittances by diaspora Kenyans have soared in recent years, driven by increased flows from the United States and Canada, and become a central peg of the economy. Kenya’s central bank recorded remittances of $244 million in January alone, up from $209 million in the same month in 2018.

Caroline paid for a new roof for her parents’ modest, turquoise-walled home, as well as for a large chicken coop in the backyard. Neighbours, mindful of her success, joked half-seriously to Quindos that she should pay their school fees, too.

Last year, Caroline sent her mother the price of airfare so she could visit Canada, where the young family had moved from Bermuda. “It was a surprise,” Quindos said. “My wife had just retired, and my daughter paid for the ticket as a present.”

This week, dozens of Wanui’s former students streamed into her house to pay their respects. Neighbours gathered around her husband, even if they struggled to grasp the enormity of his loss. Five dead in the same family was “unimaginable”, said John Maku. “People are talking in whispers. They didn’t know what to say. It is ?” He paused, searching for a word. “It is beyond.”

Quindos stood on the porch, fielding visitors and phone calls. “Pole sana!” one mourner said in Swahili – I’m sorry for your loss. An official from Ethiopian Airlines called – the airline needed a DNA sample to help identify the remains that had been collected at the crash site.

Other Kenyans who perished in Sunday’s crash also embodied their country’s outward reach. Among the dead were three women who specialised in the treatment of cancer. One of them, Jayne Kamau, was an expert in helping children with retinoblastoma, a rare eye malignancy.

Then there was Derick Lwugi, an accountant who quit his job at a Kenyan dairy company to emigrate to Canada, and was returning to take his mother for treatment for arthritis.

Kenya’s outward posture has come at a price. The al-Shabab terrorist group claimed responsibility for an attack on a luxury hotel and office complex in Nairobi that killed 21 people in January. It also killed 71 people at the city’s Westgate Mall in 2013. Both times the targets were clear: Kenya’s modern, cosmopolitan image and lifestyle, its symbols of prosperity.

That security threat, as well as a rash of ethnically-driven political violence a decade ago, has caused some Kenyans to worry that their country’s hegemonic status in the region has slipped in recent years.

“Kenyans got used to the idea of exceptionalism, that they are different,” said Patrick Gathara, a commentator and cartoonist. “The violence in 2008 made them realise they could go the way of their neighbours.”

The tremendous economic growth of Ethiopia, he said, has posed a further threat to Kenya’s status. “We are trying to find out where we fit into the region,” he said. “It’s no longer about looking over our shoulders. It’s about looking around us.”

The aircraft crash, though, was also a reminder that Nairobi and the Ethiopian capital, Addis Ababa, have become twin hubs in East Africa with different focuses. Kenya’s economy grew to nearly $80 billion in 2017 from $13 billion in 1999, according to the World Bank. In the same period, Ethiopia’s economy surged to $80 billion from less than $8 billion, while its population surged to 105 million from 64 million.

Still, it is Ethiopia that exudes the buzz these days. In recent years, Chinese and Gulf investors have poured in. A dynamic new prime minister, Abiy Ahmed, made peace with the country’s arch-rival, Eritrea, within months of his election last year. He has taken first steps toward liberalising the economy.

The national carrier, Ethiopian Airlines, is one of the most prominent in Africa, with a fleet of new aircraft, a growing network of routes and a base at Addis Ababa’s shiny new airport. “The Ethiopians are reaching for the kind of cosmopolitanism you find in Kenya,” said Mutiga, the analyst. “They want to be more engaged with the world. At the same time, going from an authoritarian to a liberalised system is very difficult. They face some formidable challenges.”

In Engoshura, Quindos lamented the corruption that has hobbled Kenya’s growth. He wondered why no Kenyan official had even called to offer a word of condolence for his loss.

“They might have just said ‘pole,’” he said, using the Swahili word for sorry. But most of all, he wanted to get the remains of his family members so he could bury them. “Every family needs to get what belongs to them,” he said. – New York Times