US Politics: Left may prefer white magic to Trump’s black, but everyone is dabbling 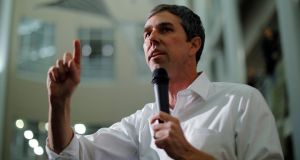 When Barack Obama launched his White House bid 12 years ago, he already had a library of well-crafted policies. Some were bold. Others were small-bore. Behind each position was a bench of experts.

The same went for John McCain, Hillary Clinton, John Edwards, Mitt Romney and other 2008 contenders. Now we could be living in a different century.

With the exception of Elizabeth Warren, whose campaign has yet to catch fire, today’s Democratic aspirants are content with a brassy slogan. Policy wonks might as well join the Mississippi gopher frog on the endangered species list.

The shift has little to do with ideology. Moderate Democrats, such as Beto O’Rourke, are as allergic to detail as are their rivals on the left. What marks the field out is comfort with post-literate politics.

If America were to begin anew, few people would devise such a Byzantine system

Who can blame them?

Donald Trump has altered what it means to run for high office. No White House contender ever came near his blend of fantasy and falsehood. He won all the same. He may well do so again.

The least bad thing you could say about Trump’s fabulism is that he paid no price for it. But the truth is uglier: it may well have brought him victory.

Little wonder the habit is spreading. It was only a few months ago that Trump dropped his magical claim that Mexico would pay for the border wall.

There is little sign that voters who believed Trump in 2016 hold him to account for failing to shake down America’s southern neighbour. Quite the reverse. They blame Democrats for keeping the US taxpayer on the hook. Good intentions are a weak differentiator.

The left may prefer white magic to Trump’s black. But everyone is dabbling.

Even the scholarly Warren is not immune. Her latest vow is to scrap the electoral college. If America were to begin anew, few people would devise such a Byzantine system.

Rather than pander to the small populations of Iowa and New Hampshire, candidates would pitch to the whole nation. Unlike in 2016 and 2000, the verdict would always reflect the popular vote.

Free college, healthcare and stronger social insurance are important goals. But there are not enough rich people to pay for them

Alas, amending the US constitution is a pipe dream. Ratification requires two-thirds of each chamber of Congress and three-quarters of US states. There is no reason to think the smaller states would agree to their demotion.

So why does Warren talk this way? The grander the promise, the likelier it is to go viral. In 2008, Facebook, Twitter and YouTube were not yet large enough to dominate the agenda.

Most Americans still got their news from television. Today, social media is the news. The starker your claim, the stronger the feedback loop. Facebook’s algorithm rewards magical thinking. The Democratic variety comes in two forms. The first is the Oprah Winfrey school of positive thinking.

The second is from Merlin’s bag of financial wizardry. Some of their magic overlaps. Both Bernie Sanders (Merlin), the socialist in the race, and O’Rourke (Oprah), who is centrist, want to talk about reparations for slavery.

Common sense would ask why America should only now compensate descendants of a system abolished more than 150 years ago. Would reparations only be for blacks who descended from slaves? How would descendants of more recent Irish and Italian immigrants feel about their ancestral culpability? What about Asian-Americans?

Even to pose such questions underlines their explosiveness. But airy talk is as far as it is likely to go. Any nominee who beat Trump and took the White House would quickly drop the idea. Reparations are as likely to heal America’s wounds as Trump.

On other questions, the schools of magic diverge. Oprah Democrats talk of America’s better angels. Should Joe Biden enter the race, he would join O’Rourke, Cory Booker and Amy Klobuchar on that side.

US politics has a soft spot for Kumbaya. But in today’s context, lofty sweet talk is misleading. Should he lose, Trump will not retire quietly. The Merlin camp is less forgiving. Its magic is in the numbers. Sanders comes close to promising money for nothing.

Free college, healthcare and stronger social insurance are important goals. But there are not enough rich people to pay for them. Imitating Denmark would have to extend to its middle-class tax rates.

Which leaves Warren. My bet is that she would win a ballot of policy analysts. But they have always been thin on the ground. During his doomed 1956 White House bid, Adlai Stevenson, the professorial Democrat, is said to have been reassured that all thinking Americans were behind him. “Yes,” he replied, “but I need a majority.” – Copyright The Financial Times Limited 2019